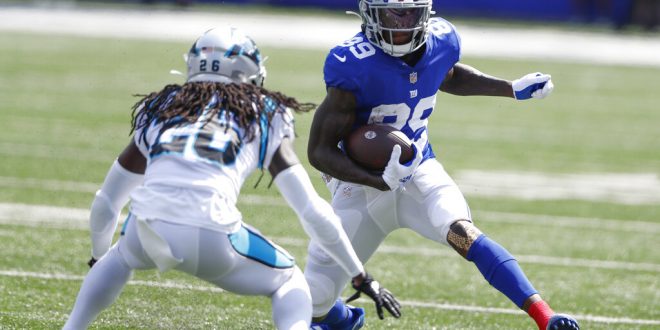 FILE - New York Giants' Kadarius Toney, right, runs with the ball during the first half an NFL football game against the Carolina Panthers, on Sept. 18, 2022, in East Rutherford, N.J. The Kansas City Chiefs acquired Giants wide receiver Kadarius Toney on Thursday, Oct. 27, 2022, for a pair of picks in next year's draft, a person familiar with the terms of the trade told The Associated Press. (AP Photo/Noah K. Murray, File)

A Gator great found a new home on Thursday. Second-year wide receiver Kadarius Toney, a 2021 first-round pick, was traded from the Giants to the Kansas City Chiefs.

Selected 20th overall in 2021, Toney flashed as a rookie but struggled to stay on the field. In week 5 of the 2021 season, he recorded 10 catches for 189 yards against Dallas, showing what made him a fan favorite at Florida:

We are 11 days away from Giants- Cowboys on MNF.

The tough love approach is “interesting”but Daboll needs to start using Kadarius Toney. Last year against The Cowboys Toney did this….10-189 on 13 target.

Get him the ball.

Despite playing in only 10 games as a rookie, Toney still finished second in receiving yards for the Giants with 420.

This year, the struggles to stay on the field were amplified. Under Brian Daboll and a new staff, Toney appeared in only the first two games, recording two catches.

In a since-deleted tweet, Toney stated yesterday “That Joke Would’ve Been Funny If I Was Actually Hurt..”

This led to speculation that strife with the coaching staff contributed to his five-game absence, not just the hamstring issue listed on New York’s injury report. According to ESPN’s Adam Schefter, Toney was no longer “in their plans.”

The Chiefs gave up a 2023 third-round compensatory pick and a 2023 sixth-round pick, according to Schefter. Football-wise, there may seemingly be no better fit for the elusive playmaker than Kansas City.

The Chiefs offense leads the NFL in scoring through 7 games, despite trading away Tyreek Hill in March. Adding a weapon like Toney to Andy Reid & Eric Bieniemy’s innovative scheme could take production up another notch if he can find the field.

For New York, it is unclear exactly where things went wrong between the second-year receiver and the staff, but rookie Wan’Dale Robinson from Kentucky figures to play a role that many thought Toney would.

The move may end up being best for both parties.

Toney As a Gator

At a program renowned for offensive playmaking through the years, Kadarius Toney was truly 1 of 1 as a Gator.

Recruited by Jim Mcelwain’s staff in the 2017 class, the former high-school quarterback saw the field early as a true freshman – his elite shiftiness flashing right away for Florida.

After making highlight-reel plays for his first three seasons, it all came together for Toney in 2020. With 70 catches for 984 yards as a senior, the “Human Joystick” played his way into the first round.