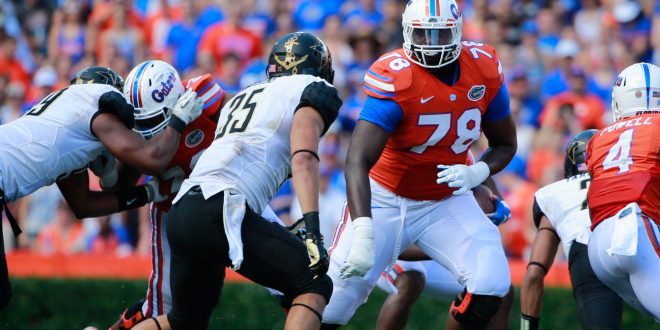 When the Florida Gator football team takes the field on September 3 for the season opener against Massachusetts, they will do so with a more experienced offensive line.

Considered a weakness a year ago, the offensive line returns most of the players from  last season, excluding Trip Thurman, who graduated and is now with the Cincinnati Bengals, Mason Halter, who also graduated, and Travaris Dorsey, who transferred.

Head coach Jim McElwain said at media day that the offensive line has grown up. He said the key to the offensive line’s success is the development and maturity of David Sharpe. As a sophomore last season, Sharpe started 13 of 14 games.

Speaking for himself on media day, Sharpe said he feels the offense, as a whole, has a lot of potential.

McElwain also said sophomore Martez Ivey will be limited in preseason camp after having shoulder surgery in the offseason.

However, Ivey said he feels healthy.

Also returning are a group of players who redshirted last year including Richerd Desir-Jones, Brandon Sandifer, and Nick Buchanan.