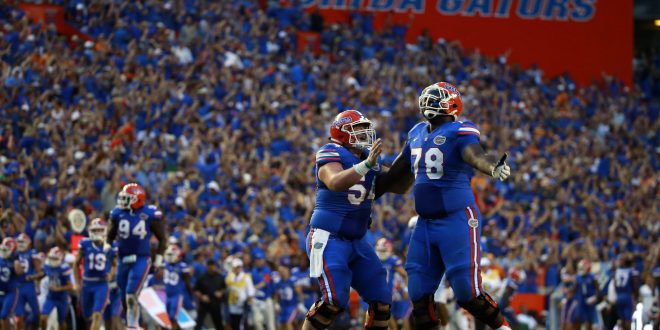 Florida Football Improving on Both Sides of the Ball

Last season, the Florida Gators exceeded expectations by finishing first in the SEC East and advancing to the conference championship against the Alabama Crimson Tide.

However, despite the Gators’ impressive run to Atlanta, this season the Tennessee Volunteers are widely favored to win the SEC East.

Gator OL Antonio Riles says that both teams have talented rosters, and he hinted that predictions don’t always pan out.

Florida’s first fall practices are in full swing, and the buzz of college football’s return has every Gator excited. On the defensive side of the ball, lineman Caleb Brantley says there is no love lost between the Gators and their rival opponents.

According to Brantley, many teams don’t respect Florida and the Gators are comfortable embracing that role, stating simply: “We don’t want you to like us.”

Brantley also says the offseason chatter has added fuel to Florida’s fire, and he’s worked all summer to improve as a player by watching film and following coaches’ orders.

Meanwhile, Antonio Riles says it’s a fun challenge facing Brantley in practice, and players on both sides of the ball are improving by feeding off of each other’s hard work.

Florida is looking for their defensive line to set the tone in each contest, and winning the battle at the line of scrimmage will create more frequent turnovers.

Florida’s offensive line will also need to improve on last season after allowing 46 sacks, more than any other FBS team. Junior offensive lineman Cameron Dillard says Florida has the best D-line in the country, which helps his fellow linemen grow as a unit. Dillard also says the Gators’ O-Line has been going the extra mile, working hard outside of practice during the offseason.

As Florida looks to build on last season’s finish, Dillard says the whole team benefits from the leadership of two experienced quarterbacks.

Staying true to the prevailing theme of a balanced attack, cornerback Quincy Wilson says the presence of young offensive talent forces the Gators’ defense to adapt and improve everyday.