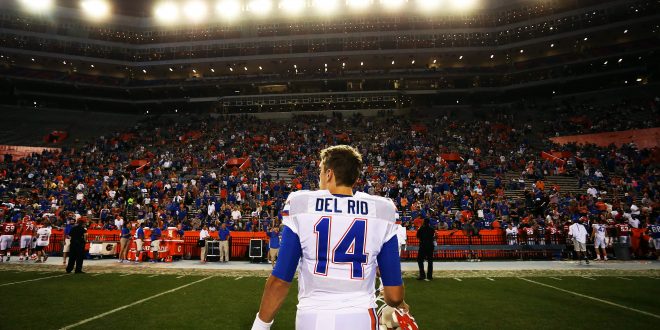 The Gators have had a revolving door of quarterbacks in the past few seasons. In 2015, redshirt freshman Will Grier was a key component to the Gators’ success in the first half of the season, throwing 1204 yards for 10 touchdowns in six games until he was suspended for taking a banned substance. He recently announced that he will be transferring to West Virginia. From that point, Treon Harris took over, but an unimpressive record of 1,676 yard for nine touchdowns on the season made him a noncompetitive contender for the position for the 2016 season. He began training as wide receiver before spring camp but recently announced that he will also be transferring, making him the seventh quarterback to leave Florida in the last four years.

So who’s left to fight not only for the Gators but for the starting quarterback position as we begin preseason camp? At Wednesday’s Media Day, head coach Jim McElwain said he believes the competition for a starting spot will humble the players into learning their place on the team.

Coming off a new endorsement by former Gator coach and new Gator ambassador and consultant Steve Spurrier, Luke Del Rio appears to be leading the pack. The redshirt sophomore started his NCAA career as a walk-on at Alabama. He then transferred to Oregon State in 2014, where he completed eight of 18 passes for 141 yards, before settling on Florida’s bench last year due to transfer rules. The son of Oakland Raiders head coach, Jack Del Rio, turned major heads at Florida’s 2016 exhibition game, leading his Blue team to a 44-6 win over the Orange.

The candidate with the experience advantage is graduate transfer Austin Appleby from Purdue University. He started 11 of the 16 games he played yielding a 9-2 record, but of those starts averaged 214 yards per game. Appleby had a less impressive spring game than Del Rio at Florida this year—he was sacked multiple times and completed eight passes for 80 yards. Even so, Jim McElwain is impressed with the similar work ethic that Appleby and Del Rio share.

WATCH: @GatorsFB QB's on the start of #GatorsCamp

Feleipe Franks enrolled midyear at Florida as a four-star recruit from Wakulla rated N0. 5 quarterback in his class by ESPN and 247sports.com. Florida’s defense at the spring game gave him a run for his money, intercepting three of his four passes.

Lastly, Kyle Trask, a two-star midyear recruit from Manvel, Texas. The true freshman is the No. 34 quarterback in his class according to ESPN. Trask had little presence during the spring game, but he did put up impressive numbers for his high school team—averaging 55.7 points per game in his last season.

With Florida’s 2016 opening game against UMass less than a month away, the time for these for QB prospects to prove themselves to the coaching staff is now. The Gators take on the Massachusetts Minutemen on Saturday, September 3rd at home in the Swamp.

Previous Florida Football Improving on Both Sides of the Ball
Next Preview: Gator Linebackers