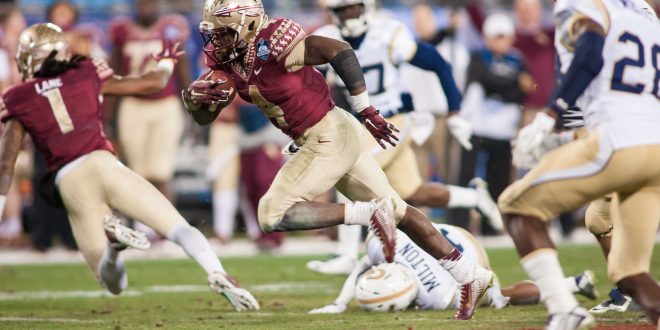 Seminoles Will Lean on Redshirt Freshman QB to Start Season

The Florida State football team is gearing up for their season opener on September 5 against Ole Miss in Orlando, Florida. This past Wednesday, the Seminoles had their first scrimmage of fall camp. With Sean Maguire, a redshirt junior quarterback out with a foot injury, redshirt freshmen quarterback Deondre Francois is taking over.

Get to know the #Noles! With Maguire injured, RS freshman Deondre Francois looks to start as QB in season opener. pic.twitter.com/wpMEmXwhhQ

A big theme for this fall camp has been seeing big improvements from players and a lot of that has revolved around Francois’ growth as quarterback. Teammates are even noticing a more commanding and comfortable presence from Francois. Freddie Stevenson, says he can tell Francois is really growing from the way he is playing to take critiques from the coaches.

Head Coach, Jimbo Fisher said he is working with  Francois on communication and taking command on the field.  While there are still improvements to be made, Fisher knows he can work with Francois on improving.

For the team, Fisher knows his players have the talent to be on the field, but they just need to work on consistency.  With the season opener is only 14 days away, the Seminoles are in full swing. Maguire is still on track to return in four weeks, but Francois will be the starting quarterback for the Seminoles against Ole Miss.