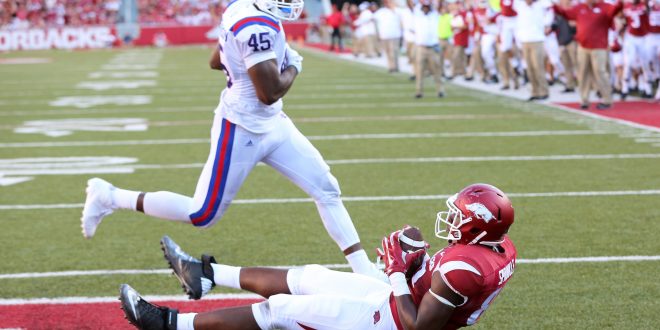 The Horned Frogs survived a 59-41 offensive shootout against South Dakota State. TCU head coach Gary Patterson is concerned with the defense despite the win. They’ll have to sharpen up the defense when they face the Razorbacks.

If there is a bright side for TCU’s defense, it’s the fact that they have a streak of having at least one sack in the last 31 games.

Arkansas Razorbacks head coach Bret Bielema sees the talent the Horned Frogs have on defense and won’t look past them giving up 41 points and 461 yards, and their sack streak.

The Razorbacks overcame a 20-14 deficit to Louisiana Tech and pulled out a 21-20 victory against the Bulldogs. Bielema believes those type of games will not only help them further on in the season, but will also help shape their identity offensively. The Razorback will see a familiar face in TCU quarterback Kenny Hill. Hill was the quarterback at Texas A&M before transferring to TCU and Bielema thinks Hill has improved since he last saw him with the Aggies. Hill threw for 439 yards and accounted for five touchdowns in his TCU debut. Beliema likes what he sees in Hill as a quarterback.

Bielema loves having the opportunity to play schools in Texas. Texas is rich is talent when it coming to recruiting and winning  against TCU would help young high school Texans to look at Arkansas.

Bielema will get his chance to impress those high school Texans Saturday night at Amon G. Carter Stadium in Fort Worth, Texas. Kickoff for this game will be at 7 p.m. and can be seen on ESPN.