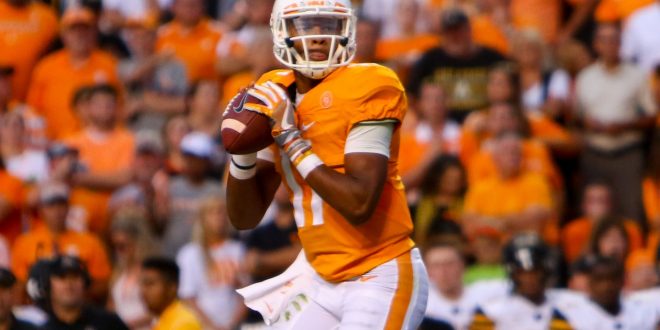 If you ask Tennessee Head Coach Butch Jones, everything that could go wrong in week one, did.

The Vols added to the struggles of the SEC in the first week when they narrowly escaped with a 20-13 overtime win against the Sun Belt Conference’s Appalachian State. Tennessee took a hit in the AP standings, dropping from ninth to 17th, quickly dampening high preseason expectations. But Jones is quick to caution that you cannot judge a team by one game.

On Saturday, Tennessee plays Virginia Tech (1-0) in the Bristol Motor Speedway, a game being dubbed the Battle at Bristol. With an expected record NCAA attendance of about 150,000, it’ll be a good chance to for the Vols to show the world week one was a fluke.

For UT, there are a few key factors that go a long way in deciding who takes home the victory. Quarterback Josh Dobbs generally struggled against Appy State, going 16 of 29 with 192 yards and negative rushing yards. Jones stresses that after taking a hard hit, Dobbs is completely healthy. Dobbs was one of the top QBs in 2015 in quarterback rating (75.9, 21st in CFB), and they’ll rely on him to slice through a stout Hokie defense. Luckily for Dobbs, he has running back Jalen Hurd to rely on if his passing game falters again. The 6-foot-4 junior ran for 110 yards and a touchdown last week and gives the Vols another weapon.

Watch Jalen Hurd come all the way across to recover the fumble. #YouTfilms pic.twitter.com/dasz73S3A0

The Hokies aren’t without weapons of their own. New QB Jerod Evans was dynamic in his first career start for VT, tearing through Liberty with 221 yards, four touchdowns, no interceptions on 20-for-32 of passing, along with 46 rushing yards. Their new high-tempo offense under first-year Hokie coach Justin Fuente. A lot of Evans’ success relies on WR Isaiah Ford, who caught 11 passes for 117 yards and a touchdown. The 6-foot-2 junior matches up with 5-foot-2 Vol CB Cam Sutton. If Tennessee shuts down Ford, the game becomes much easier.

UT is heavily favored to win, and even though it’s only week two, it’s a must-win game because of the daunting month to follow. After VT, they play the Ohio Bobcats, then kick off SEC play against Florida, Georgia, TA&M and Alabama, all teams that are ranked or have been ranked this season.