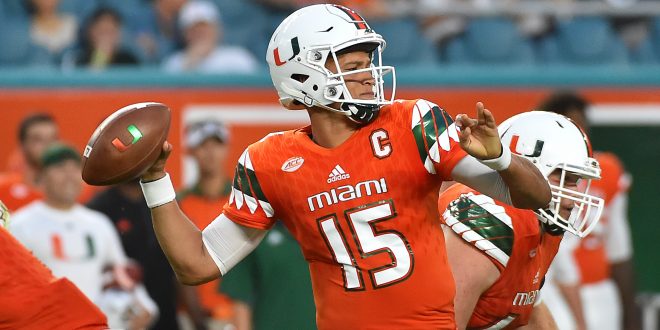 Week Two in Football Continues for Miami and UCF

The University of Central Florida football program (1-0) is on the road this week to take on fifth ranked Michigan. The two teams will meet for the first time in program history when they take the field Saturday afternoon.

The Michigan Wolverines are a 37  point favorite against the UCF Knights after destroying Hawaii 63-3 in their season opener last Saturday.

After going 0-12 last season the Golden Knights hired a new coach in Scott Frost, the former Nebraska quarterback and offensive coordinator at Oregon who was there when Marcus Mariota won the Heisman Trophy.   The fast rising Frost led UCF to a win over South Carolina State in his coaching debut last week by a score of 38-0. Coming off such a big win Frost says their goal this week was to keep working hard and show improvement from week one.

Kick off for Saturdays game is set for noon in Ann Arbor.

Off to catch our ✈️ to 〽️ pic.twitter.com/gTzK8Eajyy

Meanwhile, the Miami Hurricanes (1-0) will host the FAU Owls (1-0) on Saturday night.

The Hurricanes, who also have a new coach in Mark Richt,, kicked off their season in their newly renovated stadium with a huge win over FCS foe Florida A&M. The Hurricanes started off strong early with an interception on the season’s third play, blowing FAMU out of the water 70-3.

Richt says he was very pleased with the execution in the win over FAMU last Saturday.

The FAU Owls also recorded their first win of the season last Saturday. The Owls got a 38-30 win over Southern Illinois led by quarterback Jason Driskel, the brother of former Florida quarterback Jeff Driskel.

The Owls are known for their high tempo offense and look to use that as an advantage when they match up against the Hurricanes in the second game of the season.