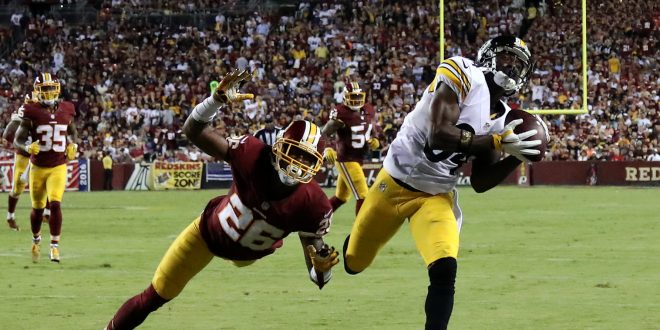 It’s a new NFL season, but one thing hasn’t changed—Antonio Brown is still the NFL’s top receiver and the Pittsburgh Steelers offense is a force to be reckoned with.

In what was already an exciting first week of the NFL season, the Steelers kicked off the double-header Monday Night Football with a dominant performance over Washington, taking down the Redskins 38-16 on their own field. Even more impressive, the Steelers offense put up this many points with star running back Le’Veon Bell and wideout Martavis Bryant suspended, and wideout Markus Wheaton battling injuries.

Pittsburgh QB Ben Roethlisberger relied on his All-Pro receiver in Brown and a young receiver core made up of Sammie Coates and Eli Rogers. Big Ben took this untested offense and threw for 300 yards and three touchdowns in the victory. Brown caught two of Roethlisberger’s touchdowns, including one on a gutsy fourth and one from the Redskins 29-yard line. Roethlisberger threw a fly route to Brown who leaped over two defenders to come down with his first of two touchdowns on the night. Roethlisberger says the team still expects to score alot of points even with big playmakers out.

The passing game wasn’t the only thing clicking for the Steelers offense. Veteran running back Deangelo Williams tore up the Washington defense rushing for 143 yards on 26 carries and two touchdowns, setting another milestone in his tenured career.

For Washington, things seemed to be going right to start the game as they led 6-0, but after falling behind 7-6, they would not come within eight points the rest of the game. Pittsburgh defense eliminated the ground game holding former Gator Matt Jones to just 24 yards on seven carries and the Redskins as a whole to 55 yards on 12 carriers. The Steelers’ stout defense also held pro bowl tight end and Gator alum Jordan Reed to 64 yards on seven catches. Thirty-nine of Reed’s yards came on the opening drive though when he hauled in three passes. The Redskins scored their lone touchdown of the night in the fourth quarter when running back Chris Thompson ran it in from one yard out.

Up next for the Steelers is a divisional matchup against the rival Cincinnati Bengals. Pittsburgh knocked Cincinnati out of the playoffs last year in the Wild Card round 18-16. Washington plays host again for the second straight week as the Dallas Cowboys come to town for a divisional matchup. Both games kick-off at 1 p.m.

Im a senior at the University of Florida currently pursuing a degree in Telecommunications. I work for ESPN Gainesville 95.3 and anchor the Monday sports broadcast for WUFT First At Five. Im from New York and an avid sports fan of all New York teams.
Previous MNF: Rams Fall to 49ers
Next Derwin James To Miss Time with Injury for No.2 FSU