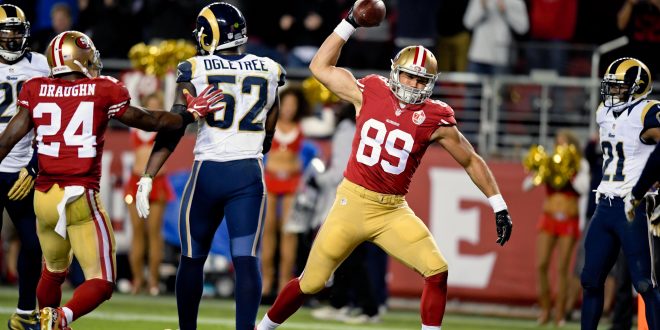 In the past ten years, only one team had been shutout on opening weekend: the St. Louis Rams in 2009.

Monday night the Los Angeles Rams joined the club with a 28-0 throttling from the 49ers in the Rams’ first game under their new name. A lot of the pregame hype and controversy surrounded quarterback Colin Kaepernick and the national anthem, however it was former Jacksonville Jaguar Blaine Gabbert who took the reins at QB for San Francisco. Gabbert came out and did nothing overly flashy, but managed the game and kept his defense off the field. Gabbert finished the night 22/35 with 170 yards and a score.

Down 14-0 at the halftime, Los Angeles struggled out of the second-half gates with a Case Keenum interception. The 49ers didn’t capitalize or even put points on the board in the third quarter but downed the Rams in the fourth putting up 14 including a score from running back Carlos Hyde. Hyde had a solid night producing 88 yards on 23 carries highlighted by two rushing touchdowns.

The Rams getting shutout was only outdone by Rams defensive lineman Aaron Donald who was ejected for misconduct during the game.

Aaron Donald has been ejected after grabbing and knocking Quinton Patton's helmet off. pic.twitter.com/0Gb7YQkwsY

Up next for the Rams will be their first game back in L.A. as they host the Seattle Seahawks in the Coliseum. The 49ers look to carry the momentum from Monday night into a Week 2 draw against the Carolina Panthers.