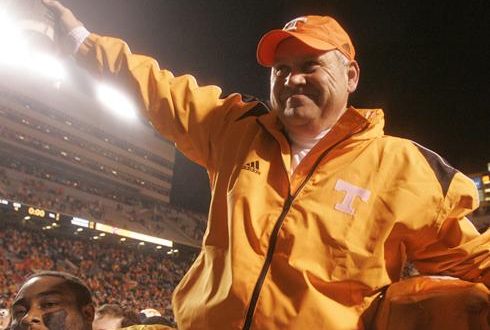 The Tennessee Volunteer football team has not beaten the Florida Gators since 2004.The last UT coach that was able to take down the Gators, however, was Phillip Fulmer.

Fulmer was the head coach of  Tennessee’s football team for 17 years, from 1992 to 2008. Fulmer led the Vols to their most successful football era, winning their first BCS championship and two SEC titles. In his time as head coach at Tennessee, Fulmer had a record of 152-52 with a 74 percent winning percentage and also had 92 players from his program make an NFL roster.

Fulmer said that the Tennessee and Florida rivalry started when him and Steve Spurrier were coaching against each other. Fulmer also said the Vols and the Gators dominated the SEC and were the top teams in the country during that time. Being the head coach of UT was certainly stressful when it came to rivalry games, but Fulmer said it was enjoyable to watch players like Peyton Manning and Danny Wuerffel compete on the field.

However, in the last few years, that power dynamic has shifted and the SEC West has proven to be more successful.

Although Fulmer is no longer coaching, he still gave his input on the matchup for this weekend. Fulmer said Tennessee should be better but their offensive line isn’t giving Josh Dobbs enough time to make plays.

Fulmer is not overly impressed by Florida either. He said the Gators need to improve altogether if they want to make the SEC East strong again.

The Florida Gators are attempting to beat Tennessee for the 12th year in a row. The Gators and the Vols will face off this Saturday at 3:30 p.m. from Neyland Stadium.

I'm a senior studying Political Science at the University of Florida. Multimedia Sports Reporter for ESPN Gainesville 95.3 and WUFT - Passionate about life, sports, and fitness.
@charliejordanuf
Previous Miami Marlins Holding on to Hope of NL Wild Card Berth
Next The Gator Soccer Team Will Face Auburn in SEC Showdown