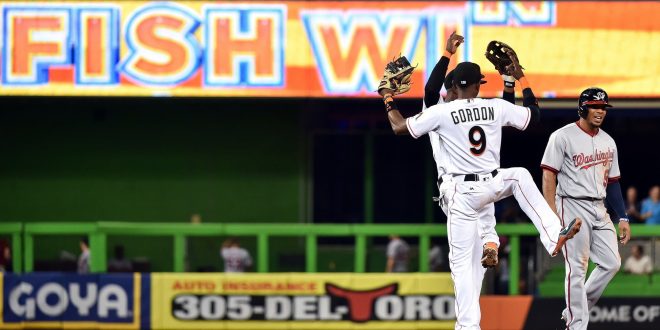 Marlins had an exciting win Tuesday night at home over the Nationals with a final score of 1-0, due in large part to Giancarlo Stanton’s home run.  Earlier in the month, Marlins’ manager Don Mattingly said the chances are slim for the Marlins to make it to the playoffs. Now, with Miami’s third consecutive win, maybe it’s time for an update. The Marlins are still breathing or as pitcher David Phelps says “the Fish are swimming up stream but we are still swimming.” With less than two weeks remaining in the regular season, the Marlins know that every game from now on is a must-win. Miami and Pittsburgh have just a 0.3 percent wild card odds and the NY Mets, San Francisco Giants, and the St. Louis Cardinals are all currently tied for the wild card spot.

Last night’s win over the division leader Washington Nationals, was pretty exciting thanks to Marlins superstars Giancarlo Stanton, who hit a sixth-inning home run and Jose Fernandez, who pitched eight scoreless innings, to give the Marlins a victory.

Nationals manager Dusty Baker, said he was very impressed with Fernandez’s performance with his change ups and fastballs. Mattingly thinks it was Fernandez’s best pitching game all year saying “he used his change- up early in the game. That was a weapon for him all night to keep them off balance. He was calm– he wasn’t overwhelming.” Fernandez struck out 12 and allowed three hits and no walks. This was his ninth double-figure strikeout game of the season.

José: "I think our guys played incredible, and that's what we look forward to the rest of the season." pic.twitter.com/F2RukgWjtj

Tonight, the Marlins will go for the sweep over the Nationals to stay on target for possible playoff action. Marlins know that now is the crunch time to make every moment count. At this point in the season, the Marlins know what it takes to remain on top. Mattingly says the Marlins goal is to make it tough for the teams in front of them for the NL wild card hunt.