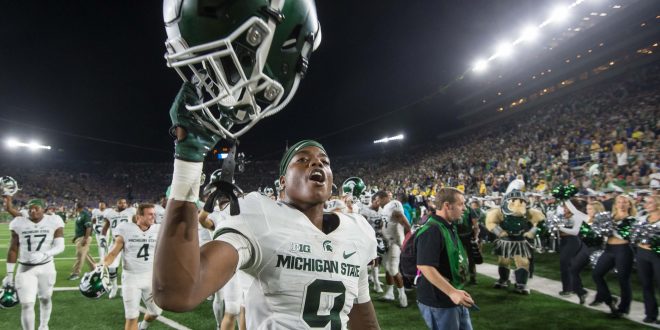 Leading up to Week Four, there are no shortage of must-see college football games where chaos can reign supreme once again.

Last week, Clemson didn’t put its fan base through any anxiety, routing SC State 59-0, an impressive score considering the Tigers didn’t record a

touchdown in the fourth quarter. While this week’s opponent is not ranked, the Yellow Jackets received votes in the most recent AP poll and more notably, Clemson hasn’t beat them in Atlanta since 2003. In fact, the last regular season loss from Clemson came in tomorrow’s locale, back in 2014. Tigers head coach Dabo Swinney said one big key is to win the turnover battle.  Georgia Tech has run wild against their first three opponents, but Clemson’s defense is staunch; they rank eighth in the nation in total defense, surrendering 250 yards per game. While it’s easy to look ahead to the Tigers’ Oct.1 game vs. #2 Louisville, the team knows they can’t overlook this dangerous squad.

Michigan State Head Coach Mark Dantonio spoke at length of how great of a football game he expects this to be, while Wisconsin head coach Paul Chryst elaborated on the rivalry the two schools have shared over the years. Despite sharing the same conference, the Spartans and Badgers haven’t squared off in four years when Wisconsin took home the first Big Ten Championship. Considering the tough games each team faces after this weekend, a win here amplifies the chances at a conference championship berth. The Spartans are riding a wave of confidence, taking down Notre Dame 36-28 in Week Three. The Badgers face several question, most significant of which is who’s going to be their quarterback. Chryst is non-commital. Against a lowly Georgia State team, true freshman Alex Hornibrook entered in the third quarter and completed eight passes for 122 yards and a touchdown to give the Badgers a decisive victory. Fifth-year senior QB Bart Houston all of a sudden finds himself trying to regain his job. They need to decide quickly because the Spartans are working on all cylinders.

Florida State enters this week as perhaps the ranked team most in need of a win. After getting embarrassed by Louisville 63-20 (the worst loss ever under Head Coach Jimbo Fisher), the Seminoles travel to Tampa to take on the USF Bulls, a team that’s won 10 of its last 12. Fisher said he was mad at the blowout loss, but that his team needed to learn from it to take on a Bulls team he was not lacking praise on. USF seeks to begin a season 4-0 for the first time since 2011. They beat FSU once in 2009. They’ll be relying on junior QB Quinton Flowers and junior running back Marlon Mack to lead the change. Flowers has a mediocre 54 percent completion rate, but still owns seven touchdowns to one interception. Mack looks to build upon his 115 yard, two-touchdown day against Syracuse last week. Florida State simply is seeking a better offensive line to give pre-season Heisman favorite Dalvin Cook a chance to carry the team. Cook is averaging a career-worst 4.6 yards per run with only two touchdowns, both coming in one game. If there’s one thing for FSU to hold out hope for, it’s that in the last five years, the team is undefeated in games following a loss.

Unlike previously mentioned games, this might be cause for less concern for Wolverine fans. Penn State enters having allowed about 34 points a game while Michigan has steamrolled its opponents, averaging 53 points this season. Jabrill Peppers, listed as a linebacker but someone who recorded yards running the ball as well as kick- and punt-returning it, said he and his team need to tighten up its defense (Wolverines allowed 21 first-quarter points against Colorado last week) in preparation for Penn State. The Nittany Lions will be without senior linebacker Nyweem Wartman-White, who suffered a season-ending knee injury. He led the team with 31.5 tackles. Even worse news for Penn State, Michigan returns standout cornerback Jourdan Lewis, who’s missed the first three games with hamstring and quadriceps injuries.

No team has entered the national conversation of championships and Heisman hopefuls with more force than Louisville. After its smack down of FSU,

they jumped from number ten to number three in the AP polls, QB Lamar Jackson and his video-game numbers don the cover of Sports Illustrated and the team’s odds at a championship sit at 5-to-1. Head coach Bobby Petrino told his team they deserved a pat on the back, but they’re only three games into the season and they’re nowhere close to meeting their goals. Petrino mentioned Marshall is a team that can play you tough and he expects a raucous crowd in Huntington, West Virginia. The biggest problem for Marshall is figuring out how to stop the Cardinals’ offense. Jackson has a whopping 10 rushing touchdowns and 913 yards, eight touchdowns and two interceptions through the air. Running back Brandon Radcliff is averaging 11.4 yards per carry and receiver James Quick hauled in seven catches for 122 yards against the ‘Noles. Surprisingly for Louisville, an easy favorite in this matchup, they have not beat the Herd since 1981, dropping their last four meetings against Marshall.