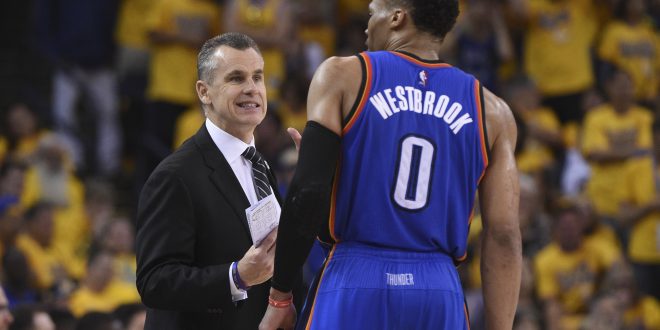 Or, maybe not, according to the Oklahoma City Thunder’s Russell Westbrook.

Despite an offseason that had the team undergo significant changes, Westbrook’s clear goal is still to win an NBA title. His drive and determination prevent him from looking at the colossal obstacles that stand in the way of that. And in some ways, that has to be respected.

In other ways, however, it’s hard to see where Westbrook is getting such confidence from.

As training camp opens for all NBA teams on Sept. 27, the team that brought Oklahoma City to the Western Conference Finals, nearly escaping to the Finals before choking away a 3-1 series lead against the Golden State Warriors, has been largely stripped away. While most know of the departure of superstar Kevin Durant, who left for the team that beat them, the other losses hurt as well. And Westbrook knows that those impact players will be missed.

Serge Ibaka was traded during the offseason to the Orlando Magic after spending his first seven campaigns with OKC, providing the frontcourt with a solid interior presence who could block shots and add a scoring punch. In return, the team received fourth-year guard Victor Oladipo, journeyman forward Ersan Ilyasova, and rookie Domantas Sabonis.

The most promising of the group is Oladipo, who has shown the ability to handle the ball, use his athleticism to get past defenders, and play some good defense himself. Together, Westbrook says, the two have the potential to be one of the best defensive backcourts in the league.

Offense is where the problem lies. There’s no doubt that both Oladipo and Westbrook can play, but playing together might be easier said than done. Both are players who are best when the ball is in their hands, creating offense for others and then driving into the lane for scores. Neither of them have a consistent outside stroke, with Oladipo boasting a career percentage just under 34 percent. Westbrook’s is even lower at 30.2 percent.

This can be problematic for spreading the floor and having possible open lanes clogged. In fact, the Orlando Magic chose to trade Oladipo partly because of his inability to consistently hit the three. That didn’t pair well with former running mate Elfrid Payton, so the front office decided to part ways with him.

The team also lost Dion Waiters, a guard who spent the past season and a half finding his niche on the team as an off-the-bench guard with a knack for short-scoring bursts. He decided to sign instead with the Miami Heat, leaving minutes open for the taking. Randy Foye, who was behind Waiters in the rotation, left the team as well, signing with the Brooklyn Nets.

The remaining added pieces leave much to be desired. Ronnie Price, the 33-year old guard from Utah Valley, is joining his seventh team in as many years. Rookie guard/forward Alex Abrines is just that, a rookie. And recently traded Joffrey Lauvergne showed promise in limited action last season in Denver, but he’s not a player that can change the dynamic of a team.

Russell Westbrook is going to get his stats. He showcased his leadership skills two seasons prior when Kevin Durant only played 27 games due to injury. He can take a team over entirely, acting as a living triple double who can get any statistic needed according to the game. His 18 triple doubles last season only clarified that.

But it’s hard to believe that Westbrook’s monstrous nights and unproven teammates can propel the Thunder to championship level.

Westbrook knows that change is difficult. But he also knows that the team will get the work done, as they’ve managed to do before.

Only time will tell if anything goes according to his plan.