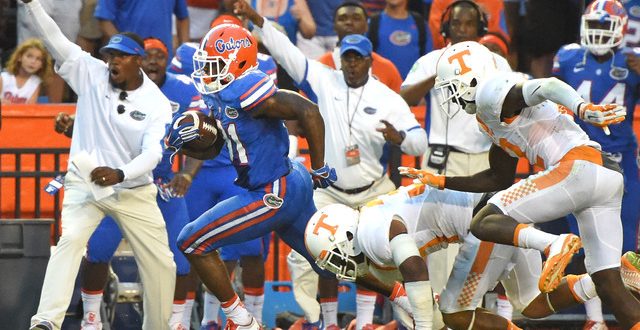 When fans look back to last year’s Tennessee game against the Gators under the lights at Ben Hill Griffin stadium, most can agree what play stands out. Wide receiver Antonio Callaway caught a touchdown pass and ran it down the field 63 yards with a little over a minute in the game, leading his team to a 28-27 win.

Antonio Callaway will get to take the field again this year in this heated rivalry after many questioned if he would play after a quad injury he susatained during the Kentucky game on September 10. The star wide receiver sat out last week’s North Texas game, however Florida did not miss him too much as they totaled 471 yards on offense.  Head Coach Jim McElwain says Callaway looked good running drills during practice Wednesday afternoon.

The Gators will need all of their play makers on the field this Saturday. Florida will look for its 12th straight win over the Volunteers, but they will have to do so without starting quarterback Luke Del Rio. Senior grad transfer Austin Appleby will make his first start as a Gator.

Neyland Stadium is known for its hostile atmosphere and is one of the toughest places to play in the SEC. McElwain says there is nothing better then traveling to a place that your team is not welcome.

"How could you not be excited to run out with 100,000 people booing you… That is so cool" – McElwain on Neyland stadiums atmosphere

The Gators and Volunteers have quite the media attention surrounding them this weekend. ESPN College Game Day will kick off Saturday bright and early at 9 a.m. to preview the game. Kickoff is set for 3:30 p.m. on CBS in front of a national audience.