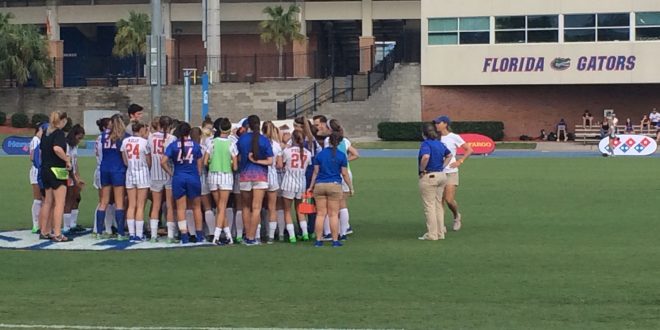 The Florida soccer team huddles before the start of the second half in their match against Tennessee on Sep. 25, 2016

The Gator soccer team continued its dominance from its previous match against Tennessee to defeat the LSU Tigers in Baton Rouge 3-0 on Friday night. Florida is now 8-3 overall and 3-2 in the SEC.

Goalie Kaylan Marckese and the rest of the Florida defense put on a shut down performance as they only allowed three shots, none of which were on goal and only one corner kick the entire match. This was their third shutout of the season and the second in a row. The team attributes good play from the defense with giving the offense more opportunities to score and that they did.

The first goal of the match came in the tenth minute in the form of a header from sophomore Melanie Monteagudo. Samantha Chung had the assist on a cross, her second on the year. It was Monteagudo’s fifth goal of the season in just her fourth start.

After halftime, the Gators came out with a quick attack again, scoring in the 57th minute to go up 2-0. This time it was freshman Kit Loferski with the goal and the assist from Sarah Troccoli. Loferski has scored two goals on the season. And in the closing minute of the match, freshman Julia Lester scored her first collegiate goal off of an assist from Monteagudo. Lester becomes the sixth Gator to score her first career goal this season.

Already with two losses in the SEC, the Gators feel like every game is a must win in this tough conference. But the performance against the Tigers shows that they are up to the task.

The LSU goalie, Caroline Brockmeier, had a season high nine saves, as Florida had 12 shots on goal and 27 total shots. The Tigers are now 6-7 on the year and 1-4 in SEC play.

Coming up for the Gators, they will face Georgia (3-8-1, 0-5 SEC) at home Thursday night at 6 p.m. as they continue to climb back up the SEC rankings.

Previous SEC Preview: Tennessee vs. Georgia
Next Preview: No.23 Florida at Vanderbilt