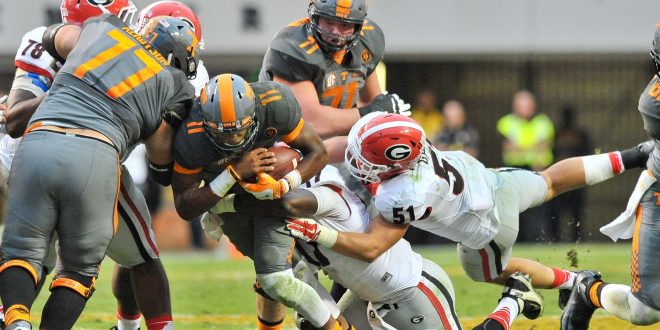 The No. 11 ranked Tennessee Volunteers will travel to Athens to face the No. 25 ranked Georgia Bulldogs on Saturday in an SEC football match up.

This matchup will mark the first road contest for the Vols, who have had three home games in addition to one game at Bristol Motor Speedway. The Bulldogs are returning home after a two game road trip to Missouri and Mississippi.

The Vols are coming off of their first victory against the Florida Gators in 11 years, which put them at 4-0 on the season. Georgia is looking to bounce back after a tough loss to Ole Miss last week.

Tennessee Head Coach Butch Jones spoke on the difficulty of facing a team like Georgia.

One of the biggest storylines heading into Saturday’s matchup is the injury of Georgia running back Nick Chubb, who sustained an ankle injury in last week’s game. Chubb is no stranger to injury, missing much of last season after a nasty injury resulted in tearing several ligaments in his knee. Despite coming back from injury, Chubb is still averaging five yards per carry this year to go along with three touchdowns.

Both coaches had things to say about his ankle injury. Georgia Head Coach Kirby Smart spoke on keeping the offense balanced without Chubb, while Jones, who is preparing as if Chubb will play, said Tennessee has to watch out for Georgia’s talented backups.

Last year it was junior running back Sony Michel who took the mantle after Chubb’s injury before getting injured himself. This year Michel will share the duties with freshman halfback Brian Herrian, who has three touchdowns on 184 yards this season.

The Volunteers will look for the continued brilliance of quarterback Josh Dobbs. Dobbs had a career game against Florida, throwing for 319 yards, four touchdowns, two interceptions while adding 80 yards rushing.

#Vols' QB Josh Dobbs thew for a career-high 319 yards against Florida on Saturday.

While Tennessee’s offense has been successful, it’s their defense that Smart is worried about, citing their size and physicality.

In the series between the two teams, Tennessee has a slight 22-21-2 edge.  Jones believes the key to victory for his team this year will be how they deal with adversity.

Whether or not Tennessee can move on to 5-0 or if Georgia can succeed without Nick Chubb will be decided on Saturday at 3:30 p.m.