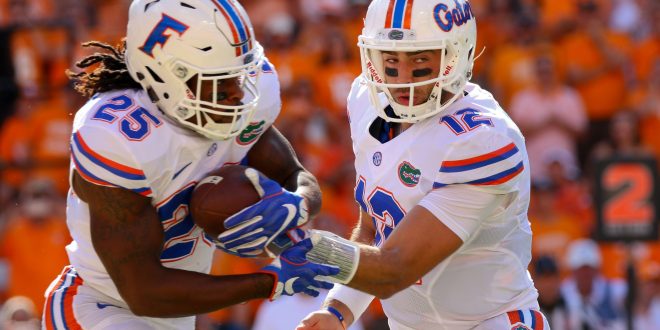 Preview: No.23 Florida at Vanderbilt

After a tough Week 4 loss to the Tennessee Volunteers, the Florida Gators are looking for answers to some daunting questions.

Is the defense really as good as it looked throughout the first three weeks of the season? Is it as bad as it was during the second half of the game against Tennessee? Does the offensive line that couldn’t gain any momentum last Saturday have the ability to improve in a week? What are some new realistic expectations for the season?

All of these questions can hopefully come closer to having answers against the Vanderbilt Commodores.

Attempting to put the disastrous collapse of last week behind them, Florida looks to a Vanderbilt team that isn’t playing like an SEC powerhouse as of late. The Commodores enter the matchup at 2-2, struggling against smaller-conference competition and looking weak on both sides of the ball. After an opening week loss to South Carolina, the ‘Dores gave up 495 total yards to the Middle Tennessee Blue Raiders, a C-USA team playing what was one of its two biggest games of the season. They followed that with a throttling from the hands of Georgia Tech, where they could only muster seven points. Last week, they barely squeezed by Western Kentucky in a game that went to overtime.

Derek Mason, Vanderbilt’s head coach, says that players need to perform better on the defensive side of the ball, but he see’s the growth of the team in that area.

However, it’s hard to see that improvement based on these first four weeks. Mason, who spent the seven seasons prior as a defensive back and defensive coordinator for the Minnesota Vikings and Stanford Cardinal, has to be expecting more out of his defense. It has surrendered close to or more than 500 yards in each of the last three weeks.

The offense leaves much to be desired as well. Aside from Ralph Webb, who leads the SEC in rushing, their game has been ugly. They’ve averaged a sub-par 4.5 yards per play to go along with 312.5 yards per game, which is good for 13th in the conference.

Despite Vanderbilt’s struggles, Florida must overlook that and not underestimate their opponents. After a week in which a lot of trash talk was exchanged between the Gator defense, their actions must start taking over instead of words.

Recently the Gators have struggled in early games, a prime example of that being their matchup last year against the Commodores. The team struggled to find any offense, and the trend continued in their next two games against South Carolina and Florida Atlantic. Florida Head Coach Jim McElwain thinks that the early game is no excuse for their malfunctions, and it all comes down to putting the team in the right position.

But the game goes much deeper than just timing. Florida couldn’t get a push from the offensive line after scoring their third touchdown of the game against Tennessee, which didn’t give the offense much time on the field. This left the defense gassed and eventually led to some injuries, which the Volunteers exploited for 38 unanswered points.

The Gators must balance out their offensive line play, which in turn will allow the defense time to rest. Only with efficiency on both sides of the ball will Florida see consistent success. Quarterback Austin Appleby, who replaced starter Luke Del Rio in the loss, says that the team is determined to showcase what they are really about.

Both teams have kinks that they must figure out, and soon. The rest of the SEC wont fair kindly to them if they continue playing as they have been in recent weeks, a lesson they’ve both had to learn early on in the season.