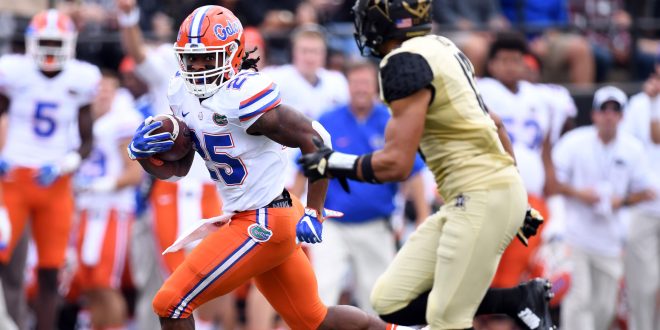 The Florida Gator football team traveled back to Tennessee Saturday looking for a win over the Vanderbilt Commodores in an SEC road game after losing in Knoxville last weekend. It was a slow first half but at the end of the fourth quarter an intercepted tipped pass by junior defensive back Nick Washington allowed the No. 23 Gators to secure their road win, leaving Nashville with a 13-6 victory.

Saturday afternoon’s game brought 30,565 fans into Deary Field to watch the Gators take on the Commodores.

Gator coach Jim McElwain credits Saturday’s win to the fans who traveled all the way to the Music City to support the Gators. Even players including defensive lineman Caleb Brantley says he felt as if the Gators were playing at home.

Sophomore running back Jordan Scarlett rushed for the game’s only touchdown and Eddy Pineiro kicked a pair of field goals to help the Gators bounce back from last week’s loss at Tennessee.

Scarlett’s four yard touchdown run came halfway through the second quarter after a scoreless first quarter and a half. Scarlett says he thought the touchdown was going to come just a play earlier but says his offensive line insured him the TD.

With a little over eight minutes left in the game, sophomore tight end C’yontai Lewis and junior tight end DeAndre Goolsby moved the ball towards Commodore territory placing Pineiro in the proper position to make his second field goal of the game.

Goolsby is not pleased with the production of the Gator offense and says they have a lot to work on before they take on LSU next week at home.  The Gators managed just 236 yards of total offense in the game. 92 yards on the ground and QB Austin Appleby throwing for only 144 yards.

#Gators improve to 4-1 and will return home to #TheSwamp next weekend to face LSU. pic.twitter.com/oDkHnL4i65

The Gators, who are now 4-1, will take on the LSU Tigers. LSU recently lost head coach Les Miles who was fired after a loss last week against Auburn. Defensive coordinator Ed Orgeron is the interim head coach.  The game kicks at noon Saturday in the Swamp.