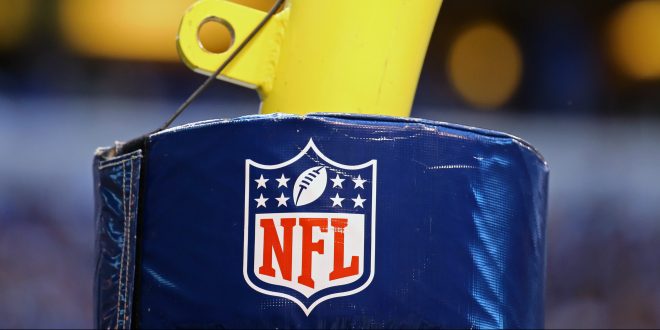 Sep 11, 2016; Indianapolis, IN, USA; A view of the NFL shield logo in the end zone at Lucas Oil Stadium during a game between the Detroit Lions and the Indianapolis Colts. The Lions won 39-35. Mandatory Credit: Aaron Doster-USA TODAY Sports

Almost a quarter of the 2016 NFL season has passed and there has been plenty of excitement to this point. As of now, there are still five undefeated teams, rookie and first time starting quarterbacks have started 11-2 combined. Unfortunately, this season has also been highlighted by multiple injuries to star players. Week 4 not only marks the quarter point of this season, but it is also marks the return of Le’Veon Bell, and the final week of Tom Brady and Josh Gordon’s suspensions.  Keeping all of that in mind, here is a preview of some of Week 4’s biggest matchups around the NFL.

These two NFC South Rivals square off for the first time this season. The Panthers have won the NFC South division the last two seasons, but Atlanta’s high-powered offense making a name for itself in 2016. Falcons running back Devonta Freeman, who is coming off a 14 carry 152-yard performance against the New Orleans Saints, says he is ready to face the Panthers defense which is holding teams to under 100-yards rushing on the season.

The Panthers have started the 2016 season off much slower than their 2015 season. Already with two losses on the season, Panthers quarterback Cam Newton says his team knows that getting their second win will feel great, especially coming against a division rival.

The Buffalo Bills will travel to Foxborough to face off against their undefeated division rival New England Patriots. The Bills are coming off a big upset win over the Arizona Cardinals, where they dominated on both the offensive and defensive side of the field. However, the Bills have lost the last two games against the Patriots and haven’t won in Foxborough since 2014.

Meanwhile, the Patriots have been without their All-Pro Quarterback Tom Brady through the first three weeks of the season, and they are still undefeated. Not only that, but they have virtually been without their star tight end Rob Gronkowski for the first three weeks, despite him taking some snaps last week. Gronkowski says he doesn’t want to rush back into things, but he is excited to be back on the field at full-force.

The Dallas Cowboys are traveling to San Francisco to take on the 49ers. Despite not having Pro-Bowl Quarterback Tony Romo, the Cowboys have started off the season with two wins, behind rookie quarterback Dak Prescott. The Mississippi State product only has one touchdown through the air, thanks to the hands of Dez Bryant, but he has yet to commit a turnover this season. However, the Cowboys could be without Bryant this week, who suffered a knee injury Sunday night in Chicago. Dallas Cowboys Head Coach Jason Garrett says they are pleased with the results from Bryant’s MRI, but he wishes the receiver handled the situation differently.

After going on the road for two straight games, the San Francisco 49ers are going into week four 1-2. The 49ers lost their last two games by a total score of 83-45, after winning their first game 28-0. Although the last two weeks haven’t looked great for the 49ers, running back Carlos Hyde is coming off his first 100-yard performance of the season against a Seattle defense that is notorious for holding running backs to under 100-yards. Hyde also has four rushing touchdowns on the season, which already puts him ahead of his three rushing touchdowns from the 2015 season. If there’s anything that looks bright in San Francisco, its in their running game.

This week’s Sunday Night Football game will be in Pittsburgh, as the Kansas City Chiefs will travel there to face off against the Steelers. In the past, the Chiefs have been known for their conservative play on offense while their defense brought the physical presence. This strategy hasn’t changed much, but the Chiefs have scored 69 points over the first three weeks of the season. Meanwhile, their defense is holding teams to just 16.3 points per game. The Chiefs have faced off against three teams with a strong running game, but none like the Steelers, who will have Le’Veon Bell available for the first time this season.

The Steelers are now known for their high-powered offense, led by the three-headed monster of Ben Roethlisberger, Antonio Brown, and Le’Veon Bell. After being held to just three points last week against the Philadelphia Eagles, the Steelers will look to attack the Chiefs defense early and often. Bell says he is in great shape heading into his first game of the 2016 season.

@WillBenner1511
Previous Gator Football Gets First Road Win
Next NFL Preview: Buccaneers Look to Get Back on Track Against Broncos