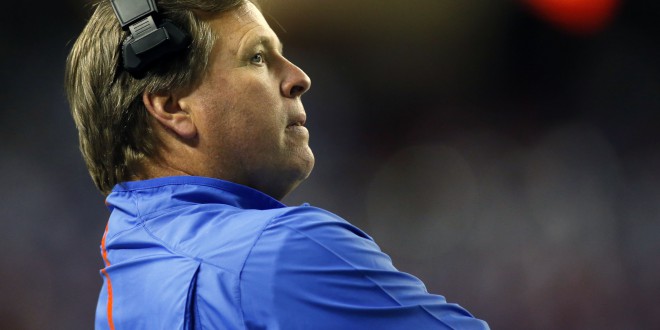 McElwain on Injuries and Keeping Sight of What’s Important

The Gator football team will not only have to conquer LSU this weekend but Hurricane Matthew as it hurls its way towards Florida, leaving Saturday’s game up in the air. But whether it’s a storm or an opponent, Gator football coach Jim McElwain is focusing on what the team can control—preparation.

How They Looked In Practice

McElwain says the intensity and competition is there in practice, which is exactly what he wants for this week’s opponent.

Quarterback Luke Del Rio split reps with Austin Appleby this week and every quarterback on the roster will be ready to play come Saturday. McElwain says they went hard in practice on Tuesday so there was some stiffness, but he is pleased with how Del Rio looks in the pocket.

As for the rest of the injury report, McElwain says defensive tackle Caleb Brantley and linebacker Alex Anzalone are expected to play with a wrap on their injured hands. Wide receiver Brandon Powell, left tackle David Sharpe (shoulder) and defensive end Bryan Cox Jr. will also be ready to go for Saturday.  Linebacker Daniel McMillian is questionable and defensive linemen Jordan Sherit and Joey Ivie are out for the game.

Although McElwain describes Cox as “fine” he explains that most of the reason why he’s ready to play is how Cox feels mentally and because of the importance of this game.

As a Hurricane Matthew heads towards Florida, one of the biggest questions of the week—aside from who will be the starting QB—is game time. University of Florida officials and the Southeastern Conference are keeping an eye on the storm and McElwain reiterated that the team will take it as it comes.

McElwain says the team gets worries about “an SEC game on Saturday”, but their is a much bigger picture in mind.

He recognized there are things out there beyond anyone’s control and whether it’s football or life, the best thing to do is not worry, look ahead and be ready for what’s coming.