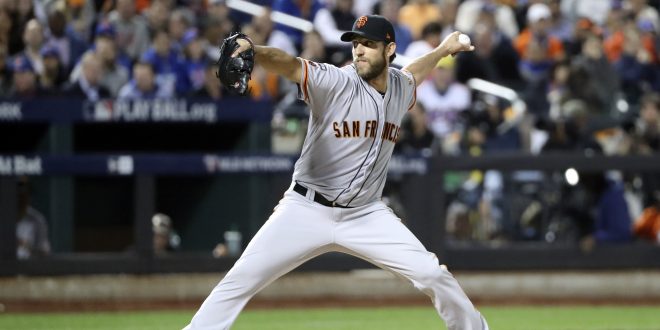 The Chicago Cubs and the San Francisco Giants are two games deep in the NLDS that continues today at AT&T Park. So far, it has been all Cubs.

Friday’s final score was 1-0 in favor of Chicago, with Saturday’s win being of the 5-2 variety. The Cubs had a league-best 103-58 regular season record, so it shouldn’t come as a surprise that they were able to defend their home field. Now, Cubs manager Joe Maddon’s focus is in keeping his players humble. A comeback is always a threat in a shorter best-of-five series.

The pitching matchup for game three is about as good as it gets. Jake Arrietta will go for Chicago, fresh off a terrific season where he posted a 3.10 ERA and a WHIP of 1.08. For the Giants, Madison Bumgarner is quite simply one of the best postseason pitchers of all time. He “only” pitched a complete game shutout in the wildcard game against the Mets his last time out. Quite frankly, those performances have become routine. Bumgarner posts a sparkling career postseason ERA of 1.94. For that reason, Maddon could consider a lineup change to help his team advance onto the NLCS.

As far as injuries, Cubs starting pitcher Kyle Hendricks left Saturday’s game after taking a line drive to the arm, but x-rays reportedly came back negative. As of Saturday, Jason Hammel was left off of the NLDS roster due to elbow tightness. For the Giants, third baseman Eduardo Nunez was left off of Saturday’s roster with a hamstring injury.