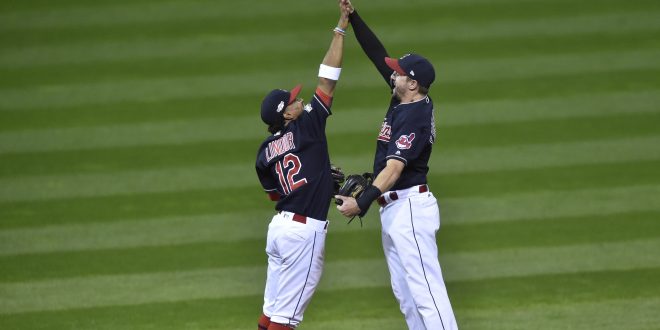 The series moves to Fenway Park for Game 3.  The rainout will not affect the starting pitching matchups, as Josh Tomlin (13-9) and Clay Buchholz (8-10) are still scheduled to start for the Indians and Red Sox respectively.

After taking games one and two in Cleveland, the Tribe take a 2-0 series lead into Game 3 looking for a sweep.  A win Monday night would land the Indians a meeting in the ALCS with the red-hot Toronto Blue Jays. Toronto wrapped up their series sweep over Texas last night.

Cleveland will start crafty right-hander Josh Tomlin, who finished the season with a 13-9 record and a 4.40 ERA.  Boston will counter with right-hander Clay Buchholz.  Buchholz has had an up and down year for Boston, going 8-10 in 21 starts with a 4.78 ERA.

Buchholz struggled pitching at home, with just a 2-7 record and a 5.60 ERA at Fenway Park this season.  However, Buchholz finished the season with three quality starts in which he allowed just three runs in 19 innings of work.

He will try to figure out a way to slow down Cleveland’s 2B Jason Kipnis and 3B Jose Ramirez, who are each hitting .571 through the first two games.

Red Sox manager John Farrell is well aware that his team is in a hole. With their backs against the wall, Farrell will need Buchholz to come up big on the mound.

Monday night could be the last game for Red Sox legend David Ortiz. Ortiz, who has had a storybook career with Boston, will retire at the conclusion of the season.  The 40 year old has been a force this year, hitting .315 with a 1.021 OPS, while mashing 38 home runs.

If Ortiz and Boston are to extend this series, he will likely need to improve on his 1 for 8 start over the first two games of the series.

This is not an unfamiliar position for the Red Sox. They made history back in 2004 when they came back down 3 games to none over the New York Yankees in the ALCS.

In 2003, they erased a 2-0 series deficit to Oakland. In the 1999 ALDS against the Indians, an ailing Pedro Martinez came out of the bullpen and tossed six scoreless innings to complete the 2-0 series comeback on that occasion.

The Red Sox will be hoping history repeats itself, starting tonight in Fenway.