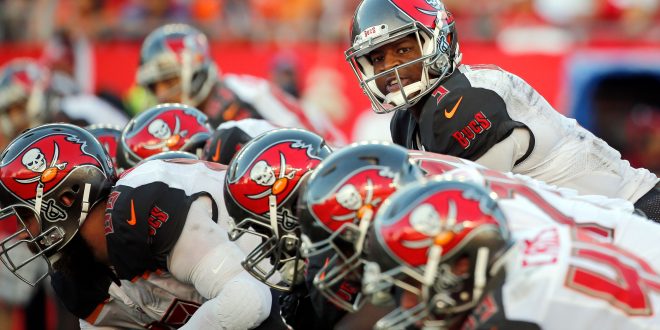 The Tampa Bay Buccaneers are traveling to Charlotte, North Carolina to face off against the Carolina Panthers Monday night. The Bucs and the Panthers are both off to a slow start thus far with 1-3 records on the season.

Despite a tough game last week, Bucs quarterback Jameis Winston has faith that his team can bounce back and is ready to fight with his team to get the win tonight. Last week, Winston was sacked five times and threw two interceptions. He went 17-for-35 for 178 yards. Winston knows that the Bucs can’t have as many turnovers as they did last week and that his team needs to focus on protecting the football.

The injury list for the Bucs is becoming quite long. Last week’s game took quire a toll on multiple players. Tight end Brandon Myers left the game with a hip injury and Noah Spencer left with a shoulder injury. Both are listed as questionable for tonight’s game. Defensive tackle Gerald McCoy left last week’s game in the second half with a calf injury and is listed as doubtful. Running backs, Charles Sims (knee) and Doug Martin (hamstring) are doubtful for tonight’s game as well. Wide Receiver Cecil Shorts III will officially be out due to a hamstring injury. Even with all of these injuries, head coach Dirk Koetter knows it will be tough but his team will just have to play their hardest with the guys who are healthy.

Overall, Koetter knows his players are pumped for tonight’s game and believes they will show up ready for the game. The Panthers have won the last six matchups with the Buccaneers. Kickoff is set for 8:30 p.m. and you can catch coverage of the game on ESPN Gainesville starting at 7:45 p.m.

@JenniferStehlin
Previous He’s Back – Tom Brady Throws for 400 in Return
Next NLDS Preview: Giants and Cubs Shift to San Francisco for Game 3