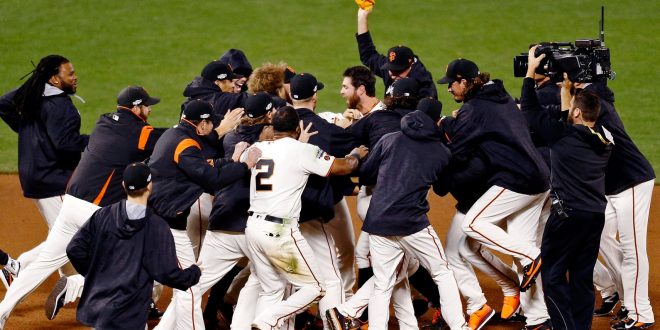 The San Francisco Giants snatched a win Monday night to extend their season after a five-hour game to taper the Chicago Cubs’ lead in the NLDS.

Giant’s Joe Panik hit a long double to deep right off Mike Montgomery in the 13th inning to send Brandon Crawford, who was stuck at second base, home.  The Giants anticipated their savior crossing the plate just as the Cubs’ Albert Almora Jr. slung the ball from the outfield.  The successful showdown sent the Giants storming the field with a 6-5 win, escaping elimination for one extra night.

Panik says his hit is definitely in the top moments of his baseball career, while Giants manager Bruce Bochy says this is even one of the best games for the Giants themselves. After Cubs pitcher Jake Arrieta’s early three-run homer in the second inning, the Giants did not stop the fight. They crept up on San Francisco’s AT&T Park score board run by run.  First in the third inning and then in the fifth.  SF broke through for three runs in the eighth hoping, but the Cubs were saved by Kris Bryant with a two-run homer to tie them 5-5 and send the game into extra innings.

The Cubs remain one win away to close the series.  San Francisco is now 10-0 in elimination games under Bochy.

Cubs manager Joe Maddon says there is absolutely no reason for Chicago to hang their heads.  Both teams played strong games and the Cubs fought hard.

Chicago may still be favored for the post season but the Giants asserted themselves showing they will not give up that easy.  Fans are definitely #BeliEVEN in the even year magic.  San Francisco is currently in the trend of championship in ’10, ’12, ’14 and they are still alive in 2016. This crazy game had everything: great defense, pitchers hitting homers and closers doing anything but.

Tuesday night’s game at 8:40 p.m. will either bump the Giants out or tie them for a chance at victory.

While Major League Baseball inches toward a return to action, the Tampa Bay Rays took …