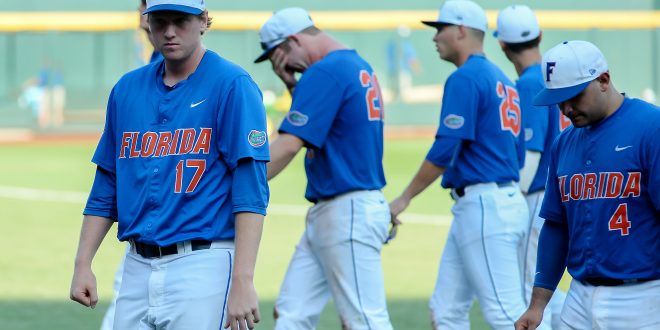 The Florida baseball team officially began their first full team practice for the 2017 season Tuesday. During the first week, practices and scrimmages will be at McKethan Stadium and are open to the public.

Practices times during the first week

First pitch of the fall…. 96 for a strike. #Gators pic.twitter.com/IPH62sJ5SC

Head coach Kevin O’Sullivan will start his 10th season with the Gators. O’Sullivan has led Florida to five College World Series appearances, including back-to-back trips in 2015 and 2016.

The Gators were swept out of the 2016 College World Series after losing two consecutive games to Coastal Carolina and Texas Tech. Florida became the third No. 1 seed that failed clinch a win in CWS history.

The Gators lost four pitchers who went within the first three rounds of the Major League Baseball Draft. A.J. Puk and Dane Dunning were both first-rounders, Logan Shore went in the second round to the Oakland Athletics and closer Shaun Anderson was selected by the Red Sox in the third round.

O’Sullivan says losing players to the draft means he has a good roster and it is just a part of the process.

Despite losing a large portion of their key players, the Florida baseball team has returned seven of its nine hitters and has a lot of young talent making an appearance for the 2017 season.

O’Sullivan is keeping a close eye on a couple of incoming pitchers. Freshmen Nate Brown and Tyler Dyson have made an impact on the head coach.

The key position battles of the fall will be at first base and center field. Freshmen Austin Langworthy and Andrew Baker are both competing for the starting role in center; the spot Buddy Reed left behind after he was drafted by the San Diego Padres.

O’Sullivan says freshman Tyler Dyson is on his radar and has really surprised him.

Florida’s 2017 schedule features 35 home games where the Gators are 265-74 under O’Sullivan’s tenure.

Previous MLB Preview: Giants Force Game 4, Look to Push Past Cubs
Next Kaep is Back