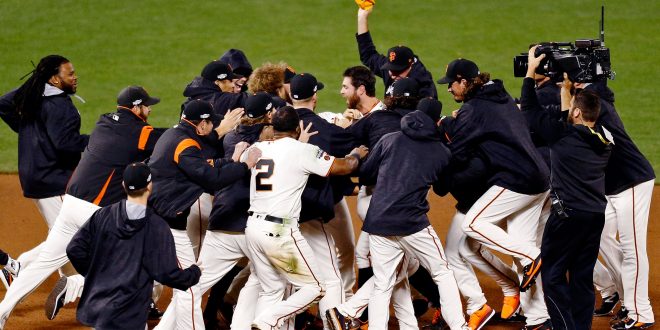 October baseball never fails to be exciting. With their season at stake, the San Francisco Giants forced a Game 4 against the Chicago Cubs thanks to a wild walk-off win. After a thrilling 13-inning ride and a five-hour game, both teams return to the diamond tonight. The Cubs look to advance to the NLCS, while the Giants seek to avoid elimination and force another game.

While you were likely sleeping…

The Giants are looking to keep up their energy levels after last night’s exhilarating win. After the thrilling victory, manager Bruce Bochy said he felt it was a great battle between two great teams. It was the tenth consecutive elimination game the Giants have won in the postseason. If San Francisco hopes to continue this streak, they must come out full force from the start in order to push past the Cubs.

While the Cubs may not have liked the outcome last night, they certainly played hard and put on a show. Jake Arrieta’s 3-run homer was huge; almost as big as Kris Bryant’s ninth inning shot.

Though last night’s game was incredibly exciting for baseball fans to watch, Cubs fans felt that excitement diminish with the outcome. However, Cubs manager Joe Maddon says he feels good about how his team played and is optimistic in regards to Game 4. Maddon said he feels his bullpen is in good shape, ruling out only Mike Montgomery.

The Cubs will send John Lackey to the mound. Lackey should be well-rested, having last pitched on September 27. He offers postseason experience, and could be just what Chicago needs to clinch. The Giants will look to starter Matt Moore to force another game. It’ll be crucial for Moore to keep his walks down as well as his pitch count, considering how hard their bullpen got taxed in last night’s lengthy matchup.

The Cubs are looking to enter familiar territory with a victory tonight. Chicago played in the NLCS last season against the New York Mets. However, they did not fare well, being swept by New York in four games. If the Cubs advance this year, they would face either the Dodgers or the Nationals to fight for a spot in the World Series.

The game is set for tonight at 8:30 p.m. The Giants face the possibility of elimination, while the Cubs could clinch with a win. Either way, one thing is guaranteed: if tonight’s game goes anything like the last, you won’t want to miss it.

Born and raised at the ballpark! Typically quiet- until it comes to sports. I'm a South Florida native with a passion for baseball nearly as strong as my faith. Grew up in garnet + gold, turned out sporting orange + blue. Likely to be found with a camera. And yes, I take food pictures.
@victoriarossman
Previous Gator Baseball in Full Swing
Next Gator Baseball Opens Fall Practice