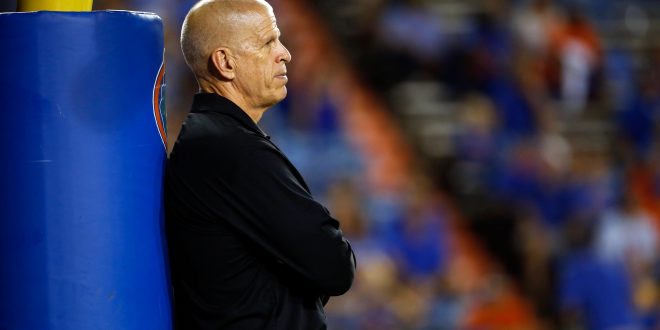 When the Florida Gators and LSU Tigers play, it is known as one of the greatest rivalries in the SEC. This year’s UF-LSU football game was originally slated for October 8th; however Hurricane Matthew had other plans. The SEC announced the game would be “potentially re-scheduled” due to precautions the University of Florida Athletic Association as well as the SEC were taking to keep fans and players safe from the category four hurricane. Late this afternoon, the SEC announced something most fans were not expecting. The game will now be played on November 19th… in Baton Rouge.

Florida Athletic Director Jeremy Foley, in a press conference not long after the announcement was made by the SEC, made it clear the Florida Gators were going to do everything in their power to play this game, even if it meant giving up a home game and traveling to Death Valley, one of the loudest stadiums in college football. Foley read from a prepared statement he had written to clear up all confusion about the new date of the game.   While stressing a resolution was reached, he did say on the UAA website in an article that LSU was “not a good partner” in the negotiations concerning this game.

In return for the sacrifice Florida made to travel to LSU this season, the Tigers will now come to Gainesville in the 2017 and 2018 seasons for a road game at Florida Field. This move made the Gators home schedule even more impressive next season with four key SEC match ups– Tennessee, Vanderbilt, LSU, Texas A&M, plus Florida State coming to the Swamp.

Florida coach Jim McElwain also showed his support for the SEC’s decision to move the game while speaking at Gator Talk this afternoon, saying his team was going to do anything it could to get a chance to play the Tigers.

Coach McElwain live at #GatorTalk: "no way we weren't going to play LSU…we will go out in the parking lot to play if that's what it takes" pic.twitter.com/Wf47HKQTXO

Foley numerous times commended the hard work of SEC commissioner Greg Sankey who worked day and night to resolve the issue of rescheduling this game. Sankey released a statement that said it was crucial that both UF and LSU come to a resolution and that “this game needs to be played.” Foley discusses the problems that arose when trying to reschedule this game throughout the week, and why Sankey had to take his time on making a final decision.

For all ticket inquires for season ticket holders as well as fans that would like to travel to LSU, all questions can be answered on FloridaGators.com regarding changes.

Gator Men’s and Women’s Swimming and diving are finally making a return. With Southeastern conference …