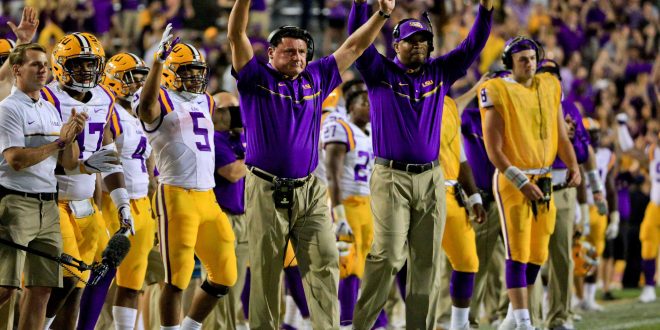 The Southern Mississippi Golden Eagles (4-2) will be traveling to LSU Saturday night to take on the Tigers.  This will be LSU’s first game back after their previous game was postponed due to Hurricane Matthew.

The leader of the Tigers offense, running back Leonard Fournette, will not be in action for the Tigers this weekend. Interim head coach Ed Ogeron says Fournette has not been able to practice all week.

Fournette re-aggravated a preseason ankle injury against the Auburn Tigers.  The LSU running back did not play in LSU’s last game versus Missouri.

Fournette was a star for LSU last year, rushing for nearly 2,000 yards and for 22 touchdowns.  With Fournette out, LSU will turn to Derrius Guice to take over the rushing duties.  Fortunately for the Tigers, Guice had a tremendous game replacing Fournette. Against Missouri, Guice rushed for 163 yards and scored three touchdowns.

LSU’s Defense Ready for the Challenge

Ed Ogeron knows that Southern Mississippi’s dynamic passing offense may give his team some trouble this weekend.

Mullens also spreads the ball around evenly to his Southern Mississippi receiving corps. This group is highlighted by big play threat Allenzae Staggers and short yardage receiver D.J Thompson. Both receivers have over 20 catches on the year.  Staggers has accounted for 562 yards with five touchdowns, while Thompson has accounted for 291 yards and four touchdowns.

Southern Mississippi is Not Afraid Of the Big Stage

Going into Death Valley and playing under the lights can be intimidating for some of the smaller schools in college football. However, Southern Mississippi has already shown they are not afraid of playing under the bright lights.  The Golden Eagles started off their year with a road win over another SEC opponent, the Kentucky Wildcats.  Therefore, the Golden Eagles will be hoping for a similar result as they travel into Death Valley.

Keys To the Game

Kickoff between the Tigers and the Golden Eagles is set for 7:30 p.m. on Saturday, live on the SEC Network.