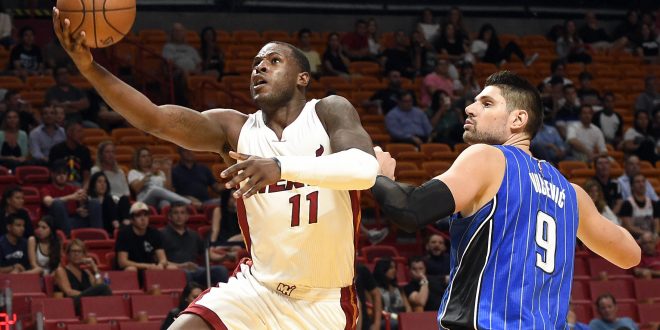 The Heat defeated the Orlando Magic 107-77 in a preseason tilt Tuesday night. Miami is now 4-2 on the preseason and Orlando falls to a disappointing 1-5.

The Magic competed well early but didn’t retain a lead at any time after the first quarter. Head Coach Frank Vogel says the team’s performance was simply not good enough. Vogel’s team shot only 33.7 percent from the field thanks in part to what Heat Head Coach Eric Spoelstra says was a good Miami defensive effort.

Heat guard Dion Waiters capped the second quarter with a half-court buzzer beater to put Miami up 56-46 at the half.

Gotta give you a few more looks at Dion's buzzer beater! #SCTop10 pic.twitter.com/qzlIlnkWwJ

The Heat’s huge margin of victory came in part due to their three-point shooting performance and Orlando’s lack there of. Miami went 10-of-24 from downtown while Orlando managed to convert only 2-of-19 attempts. Vogel says the Heat played faster than his squad and that some pride needs to be instilled in his bunch.

Willie Reed had 16 points and 11 rebounds for the Heat last night. He’s looking to secure an opening day roster spot and after the game Eric Spoelstra says Reed has shown improvement and made some adjustments that helped the team.

Orlando may have had a rough trip to Miami Tuesday night but they’ll have a chance to get some revenge quickly. The teams meet on October 26 to open up the regular season in Orlando. Both teams will be in action again Thursday night as the preseason nears its end. Miami goes on the road to face the Charlotte Hornets and Orlando will host the New Orleans Pelicans.

I'm an above-average golfer with surprisingly great touch around the greens. Click on my twitter link for some sports talk.
@Ry_McGinn
Previous Lightning Force Overtime, Top Panthers in Shootout
Next Preview: ALCS Game 5