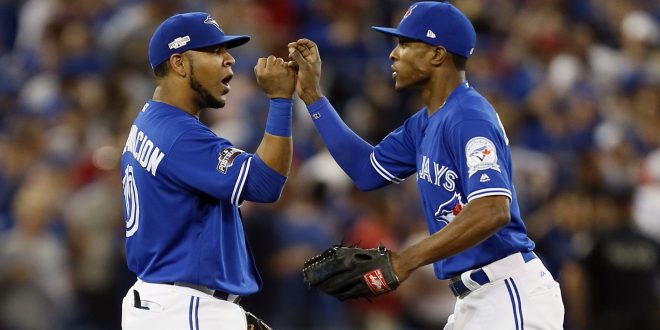 If you’re going to win four straight in a best of seven series, you have to start with the first one. While on the edge of elimination, the Toronto Blue Jays survived to play another game. The Blue Jays defeated the Cleveland Indians 5-1 in Game 4 of the American League Championship Series.

The Blue Jays could increase their chances of coming back from a 0-3 deficit by grinding out another win in Game 5 and then again in Game 6. In Tuesday’s game, the Blue Jays scored five runs, which is more than what they had scored in the first three games combined (three). After Josh Donaldson’s  401-foot home run to left field to give the Blue Jays a 1-0 lead in the third, the team started catching fire. An RBI single flare in the fourth by Ezequiel Carrera helped pushed the lead to 2-0 and the Blue Jays never looked back.

The Blue Jays are no strangers to elimination games—flashback to last year’s post season when Marco Estrada held the Kansas City Royals to just one run for 7 2/3 innings of Game 5. Estrada and the Blue Jays are aware of what’s at stake for this series, especially with  Jose Bautista, Edwin Encarnacion and Michael Saunders all hitting the free-agent market after the season.

.@BlueJays win! It ain’t over ‘til it’s over. #OurMoment pic.twitter.com/GwA9Su6azQ

On the other side of the playing field, the Indians will look to try to not waste home-field advantage. The Indians will try and win without  left hander Andrew Miller and right hander Cody Allen—who could arguably be considered their best two relievers. The Indians will be starting rookie lefty, Ryan Merritt in Game 5. Merritt made his only career start in the final series of regular season play. Merritt is not known for throwing hard, with his average fast ball being around 88 mph, but he does have a package of four pitches which was successful in the minors.

Donaldson and the Blue Jays know the series is far from over despite trailing, but they are confident that they can comeback and win the series.

The first pitch will be at 4:08 p.m. at Rogers Centre in Toronto, Wednesday.