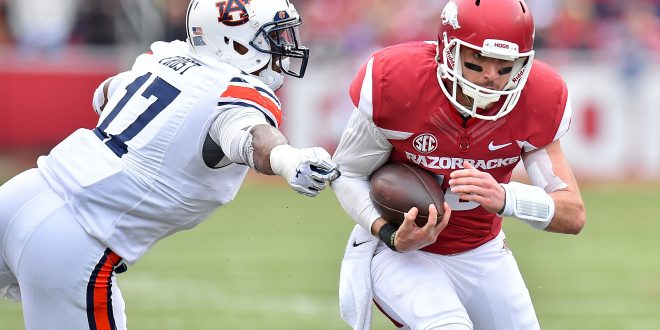 The Arkansas Razorbacks and Auburn Tigers will face off at Jordan-Hare Stadium this Saturday in an SEC West showdown. Both teams showed a steady climb in the AP Top 25 in Week 8. The Razorbacks jumped five spots to No. 17, and the Tigers moved up two spots as they now sit at No. 21. Although Arkansas is ranked higher in the Top 25, Auburn sits at third in the SEC West while Arkansas is fifth after dropping games to Alabama and Texas A&M. 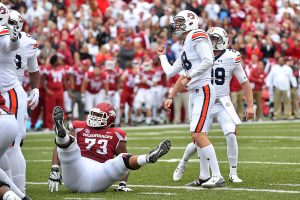 The last time these two teams met Arkansas was able to squeeze out a victory, and Auburn will never forget it. Auburn drove down the field late in the fourth quarter to kick a field goal to send the game into overtime. The fans in attendance got a real show, because it didn’t take just one overtime to decide the winner. Not two overtimes, not even three, but it took four overtimes to decide this one. This was the longest game Arkansas has played since their 6OT game against Kentucky in 2003.

Arkansas Quarterback Brandon Allen connected with his wide receiver Drew Morgan on the first play of the fourth overtime period for a 25-yard touchdown which ended up being the game winning score. Allen finished the game with 233 yards and three touchdowns while trowing one interception. Morgan tallied 56 yards on six catches for two scores.

Auburn fought hard in this one to say the least. Tiger Quarterback Sean White threw for 254 yards and former running back Peyton Barber finished with 120 yards rushing on 37 carries. Barber managed to score four touchdowns as well. Ricardo Louis, who was Auburn’s leading receiver last year, caught 6 passes for 79 yards against the Razorbacks. 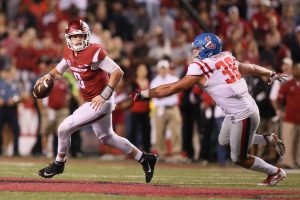 Arkansas has a new quarterback under center in this years matchup, but Auburn is more than familiar with the name.  Austin Allen, Brandon Allen’s younger brother, is leading the way for Razorbacks this season. So far the Junior has thrown for 1,861 yards, adding 18 touchdowns with just six interceptions. Those numbers put Allen at the top of the SEC quarterbacks in touchdowns and yards. Unfortunately for the Razorbacks, they have allowed Allen to be sacked 17 times, which is tied for the conference lead.

On the defensive side of the ball, the Razorbacks will have to defend a Tiger passing attack led by Sean White. Although White only has six passing touchdowns this season, he is currently leading the SEC with a total QBR of 157.2. Auburn goes with the ground-and-pound approach, so Arkansas should look to blitz early and often to limit the rushing attack. Arkansas currently ranks inside the top 4 in the SEC  in sacks, interceptions, and forced fumbles under defensive coordinator Robb Smith.

To hear Arkansas Head Coach Bret Bielema give his thoughts on this weeks game against the Auburn Tigers, click the link shown below.

Losing a game to a rival team always stings slightly more than a loss to a regular opponent. If Auburn wants to avenge last year’s loss, they will need to contain Arkansas running back Rawleigh Williams III. Williams currently leads the SEC in rushing with 785 yards through Week 7. Auburn’s rushing attack is no joke either. The team has two running backs with over 500 yards this season, joining Texas A&M as the only teams in the SEC to reach this mark. Kerryon Johnson is dealing with an injury, but Coach Malzhan believes he will be ready to go this Saturday. If Auburn can get the run game going early, White will be able to take some shots of his own.

One player to watch on the defensive side of the ball for Auburn is Carl Lawson. Lawson is currently tied for second most sacks by an SEC player this year with six. As mentioned earlier, the Razorbacks have allowed 17 sacks this season, so look for Lawson to make his presence felt early in this one.

Kickoff is set for Saturday at 6 p.m and can be seen on ESPN. 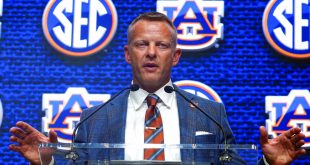