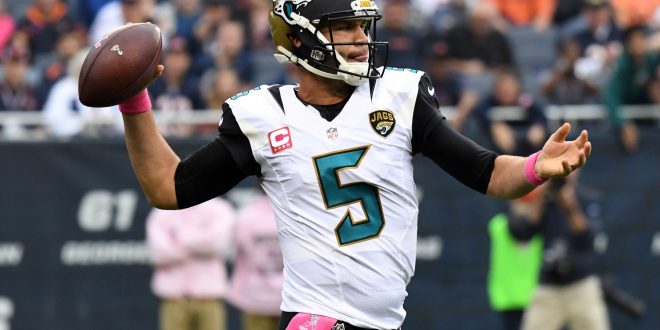 The Jacksonville Jaguars will look to extend their win streak to three this week against the Oakland Raiders.  The Jaguars started the season 0-3, but then won two on the road: in London over Indianapolis and then last weekend at Chicago.  The Raiders (4-2) come into Jacksonville with something to prove.  Oakland had won three in a row before losing at home last weekend against the Kansas City Chiefs.  The Raiders are tied atop the AFC West standings with the Denver Broncos. It’s a battle of third-year quarterbacks in this AFC matchup.  Both Jacksonville quarterback Blake Bortles and Oakland quarterback Derek Carr are products of the 2014 NFL Draft.  Both were drafted in the first round by two teams in desperate need of a turnaround.  Bortles was picked up third overall by a Jacksonville team that was 26-54 from 2009-2013.  Carr went 36th overall to a Raiders franchise that was 29-51 in the five seasons prior and hadn’t achieved a winning record since losing Superbowl XXXVIII.  Bortles says he enjoys watching Carr play and will always appreciate the bond they share.

This game will be a telltale sign of the development of the two quarterbacks.  Bortles has eight passing touchdowns with seven interceptions this season while being sacked 14 times due to a struggling offensive line.  So far, Bortles seems to have regressed from his performances last year when he threw for 4,425 yards, 35 TDs, and 18 INTs.  However, two impressive road victories could be the confidence boost Bortles and the Jags needed.  Bortles also has a pair of talented receivers in Allen Robinson and Allen Hurns.  Considering Oakland is last in the NFL in yards allowed (444.8 per game) and 24th in scoring defense (27.2 points per game) this season, Robinson and Hurns will have ample opportunities for big plays downfield .

Carr on the other hand did not fair too well in Week 6 against the Chiefs, but has produced otherwise stellar performances.  Carr is completing 66.5% of his passes.  He is tied for fifth in the NFL with 12 passing touchdowns and has the fewest interceptions (three) of any quarterback with at least 225 attempts.  He also has two go-to receivers in Amari Cooper and Michael Crabtree. Cooper is in his second year in the league, and in his six games this season he is fourth in the NFL with 585 receiving yards and is averaging 16.3 yards per catch.  Crabtree is tied for fifth in the league with five receiving touchdowns.  Their challenge will be Jacksonville’s defense, which has gotten fourth quarter stops all season.

Jack Del Rio makes his first return to Jacksonville as the head coach of another team.  Jack Del Rio was the head coach of the Jacksonville Jaguars from 2003-2011.  In 2004, he led the team to their first winning record since 1999 (9-7), and followed with a 12-4 finish the next year, taking the team to the playoffs. The 12-4 finish is the second best finish for the team in franchise history. In 2007, Del Rio again took the team to the playoffs after an 11-5 finish, advancing to the Divisional Round.  This was the last time the Jaguars made a playoff appearance.

Gus Bradley, the current head coach of the Jaguars, is now in his fourth season posting a 14-39 record during his time in Jacksonville. Last year, the Jags finished 5-11, the most wins by the franchise since 2011.  However, fans are looking for more wins, so each game this season is crucial for Bradley’s future.

Catch the game Sunday on CBS at 1 p.m.

Tom Brady heading to Tampa? Many NFL fans are still shocked at the move made …