On a brisk night in Columbia, Missouri, Florida faced the Missouri Tigers for the final SEC match of the regular season.

In a match that stayed scoreless through most of the first half and highlighted plays by the goalkeepers was won by just one goal. The Gators scored in the 36th minute which turned out to be the game winner.

Florida started with only three defenders in the backfield- opposed to their normal four- which Missouri took advantage of early on in the match. Florida’s goalkeeper Kaylan Marckese made some smart saves to start the game as the Tigers brought on the high press and had four corner kicks in the first ten minutes of the match.  Marckese ended the game with four saves.

When Julia Lester subbed in for Florida during the 21st minute, the Gators made the adjustments they needed. They quickly put four defenders in the back which helped give Florida better possessions and more opportunities to score.

Lester also contributed on the offensive side for Florida scoring the lone goal of the match. With about ten minutes to go before halftime, Florida had a corner kick that was headed by Pamela Begic. A Missouri defender then headed the ball away from the goal to clear it, but it went right to Lester who took a 20 yard shot that went into the back of the net. Lester, only a freshman, had the biggest impact of anybody in the game, allowing Florida to change their defensive scheme and score the game winning goal, her second score of the season.

Deep into the second half, Missouri had a great opportunity to tie the game when they first appeared to score a goal. However, offsides was called on Missouri and the score remained 1-0.

With the regular season now over, the SEC seeds are set and the top ten teams will move on to the SEC tournament in Orange Beach, Alabama starting next Monday. Due to the results of this match, Florida (13-4, 8-3 SEC) clinched the fourth seed in the Conference and Missouri (11-6-1, 6-4-1 SEC) clinched the fifth seed. That means that they will face each other again in the quarterfinals on Wednesday night.

The Gators will have almost a full week before they play again, which will give them a great opportunity to address the adjustments they need to make against Missouri in order to have a more dominant performance in the SEC tournament. 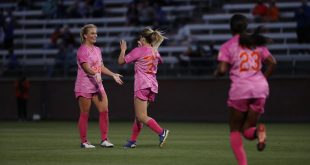