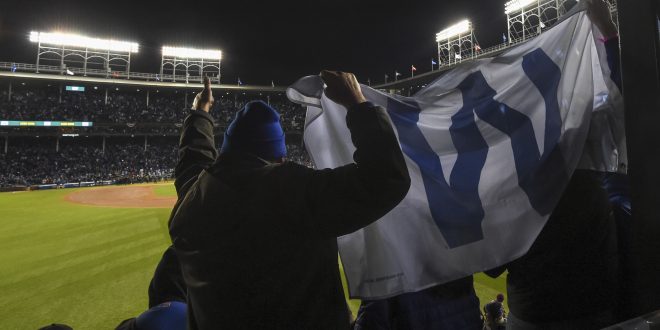 For the first time since 1945 the Chicago Cubs “Flew the W” at Wrigley Field during the World Series.

The crowd of 41, 711 cheered on anxiously as Aroldis Chapman took the mound in the seventh inning to record his first ever eight-out save. It was a tall ask by manager Joe Maddon to bring in his closer that early. Some thought the decision was a “panic move”, but it was all part of the plan.

The thin lead Chapman held onto was supplied by a three-run fourth inning. Kris Bryant got things started with a solo homerun—taking a 92-mph fastball over the heart of the plate to the first row out in left field. The inning continued with two manufactured runs. Rizzo hit a double off the wall before being singled in by Addison Russell. With the bases loaded, the 39-year old David Ross hit a sacrifice fly to plate in Ben Zobrist to make it 3-1 Cubbies.

The Series heads to Cleveland where the Indians will try to win in front of their own fans. However, Joe Maddon believes that the momentum from this win can swing the Series around.

One game at a time. #FlyTheW

See you in Cleveland. pic.twitter.com/hxUIi3L8Wu

Originally from Ocala, Florida. University of Florida Class of 2017. Avid FIFA player willing to beat anybody. Follow me on Twitter for everything you need to know!
@JoshLaSelva
Previous NFL Week 8 Round Up
Next Gators Break Into Top 10 in AP Poll