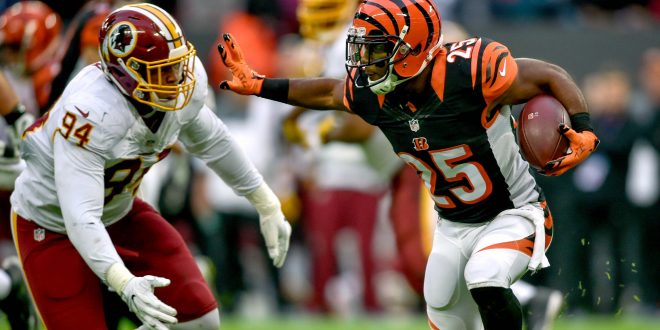 NFL Week 8 Round Up

Week 8 in the NFL had no shortage of big performances.

The Washington Redskins tied the Cincinnati Bengals 27-27 in London on Sunday. In the NFL this is the second tied game in a season for the first time since 1997. Ironically, this tie followed last week’s tie between the Seattle Seahawks and Arizona Cardinals making it the second time the NFL has had two ties in a season following back-to-back weeks. Redskins quarterback, Kirk Cousin finished with a season high of 38 completions of 56 attempts for 458 yards.

This was a big-time game for Bengals Quarterback, Andy Dalton.  He went 27-for-42 for 284 yards and a touchdown to Tyler Eifert. Both teams have byes this upcoming weekend.

The Oakland Raiders beat the Tampa Bay Buccaneers 30-24 in overtime. With 1:45 on the clock Derek Carr threw a 41-yard touchdown pass to Seth Roberts to help to Raiders win. Carr finished with a franchise record of 513 passing yards completing 40 of 59 passes without an interception. The Raiders also set an NFL-record with 23 penalties for 200 yards to remain unbeaten on the road. The Raiders are now 6-2 and the Bucs are 3-4.

The Atlanta Falcons rallied back on the Green Bay Packers on a last minute drive. With Falcons quarterback Matt Ryan leading the team down the field they found success over the top with an 11-yard touchdown pass to Mohamed Sanu. The Falcons beat the Packers 33-32. Ryan went 28-35, with 288 yards and 3 touchdowns.

The Dallas Cowboys defeated the Philadelphia Eagles 29-23 for an overtime win. Rookie quarterback, Dak Prescott forced overtime with a touchdown pass to Dez Bryant and forcing overtime. Prescott then a threw a 5-yard touchdown pass to Jason Witten to give the Cowboys their sixth straight win. Prescott finished 19 of 39 for 287 yards. The Cowboys are now 6-1 and have the best record in the NFC.

For Monday Night Football, the Chicago Bears will face off against the Minnesota Vikings at home. Kickoff is set for 8:30 p.m.