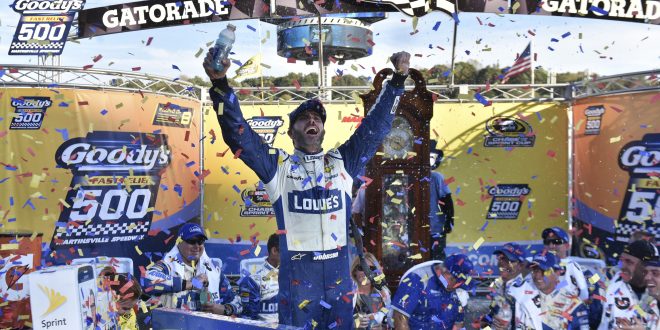 Jimmie Johnson not only became the first to punch his ticket by winning at Martinsville Sunday, but he is also one step closer to tying a NASCAR record. With a win at Homestead-Miami Speedway on November 20, Johnson would join good company, tying Richard Petty and Dale Earnhardt for the most title wins (7) in NASCAR history.

In the big win Sunday at the Round of 8 for NASCAR’s Chase for the Sprint Cup, Johnson ended his drought of not earning a first place victory at the .526-mile short track since the spring of 2013.

From the start, Johnson was optimistic about he and his team’s chances.

Denny Hamlin is not a fan

The third place finisher in Sunday’s race, Denny Hamlin, had an issue with how Johnson raced.

The two drivers both addressed the media afterwards, and Hamlin revealed that his frustrations with Johnson did not begin just yesterday.

“We were racing for 13th or something at New Hampshire and he turned us, luckily I saved it,” Hamlin said. “Nearly wrecked us there. I raced him hard for the lead at Charlotte and then we come here and I catch him from a really long ways back. They didn’t want to let us go. It was frustrating from my standpoint, so I had to move him out of the way. I gave him many warnings on the radio.”

“I’m puzzled that he had to move me like he did,” Johnson said. “The inside is a preferred lane. I gave him the inside.”