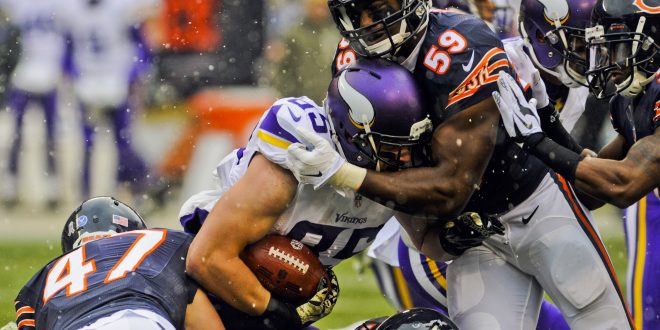 The Minnesota Vikings are hoping to get back on track on Soldier Field against the Chicago Bears.

In Week 7 , the Vikings suffered their first loss against the Philadelphia Eagles in an ugly, turnover-filled game.

Starting quarterback Sam Bradford was completely off his game, but he knows what needs to be done in order for the offense to improve.

The good news is, if you want to get back on track, going up against a 1-6 squad is probably the best way to do it. But Soldier Field is a tough place to play, regardless of the stats. If Bradford hasn’t recovered from last week’s game, however, things won’t look good. Any concern on the Minnesota’s side, lies with the possibility that the Eagles gave future opponents a blueprint for beating the Vikings.

A home field advantage doesn’t seem to fit the Bears considering they have lost 12 of their last 14 games on Soldier Field.

And they’re coming off their worst game of the season in a loss against the Packers where they lost quarterback Brian Hoyer to a broken arm.

So now Jay Cutler, recovering from a thumb injury, regains his starting job.

Cutler will suit up for the first time since the second game of the season. The five game absence will be the longest he has returned from and he’s up against the league’s stingiest defense.

He says him and Coach Fox have the same, simple vision for the team.

Most experts believe the Vikings will take the win tonight at 8:30 p.m. at Soldier Field in Chicago.