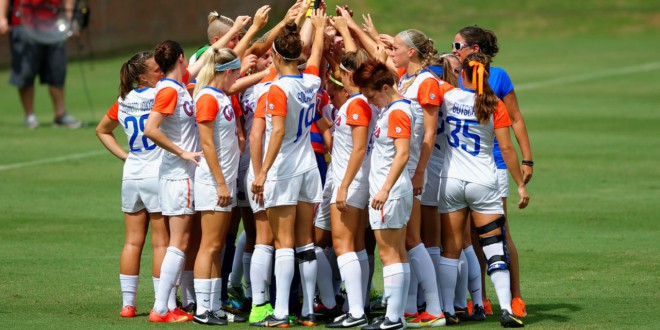 Gator Soccer Moves on to Semi-Finals of SEC Tournament

Last week, the Florida soccer team played at Missouri where Florida won a tight 1-0 contest.  A week later, the same two teams met in the SEC Tournament in Orange Beach, Alabama in the quarterfinals of the SEC Tournament.  The end result, with higher stakes on the line and in one of the most dramatic games of the season, was the same, a Gator win, this time by penalty kicks.

The Gators are now in the semi-finals of the SEC Tournament after defeating Missouri 8-7 in a penalty shootout after drawing 3-3 through regulation and two overtime periods. Florida will now face No.2 ranked South Carolina for a spot in the final on Friday afternoon.

The game took countless twist and turns, starting in Missouri’s favor. From the beginning, the Tigers seemed to rattle Florida with their tactics. They employed a high pressing game, pressuring Florida as soon as they touched the ball, making it difficult for the Gators to get any rhythm in their build up play. The pressure in turn played a part in the first goal of the match.

Just three minutes into the game, the Tigers caught the Gators by surprise. Mizzou forward Jessica Johnson took a through ball from Allie Hess, rounded Gator keeper Kaylan Marckese, and put it away into the empty goal. There was some doubt as to whether she was offside or not, but after having a goal disallowed in the prior game due to offside, it was an ironic twist that gave Mizzou the early one goal lead.

The Gators answered right back.

Melanie Monteagudo, who would go on to be perhaps the outstanding player of the match, got things going for Florida at the 13th minute. Nice link-up play between Mayra Pelayo and Sarah Troccoli led to Monteagudo being one-on-one with Mizzou goalie Kelsey Dossey. Monteagudo waited a second before firing the ball into the top right-hand corner of the net for her seventh goal of the season to tie things up 1-1.

Florida earned a corner kick on the right side that was taken by Gabby Seiler. Meggie Dougherty Howard got a head on it and the ball bounced closer towards goal. Amongst a crowd of Tiger defenders, Trocolli was able to make contact on a right-footed effort, and the near-range shot bounced off  fellow Gator Samantha Chung and into the back of the net to make it 2-1.

Here's a look at #Gators second goal of opening half here at @SEC Tournament.

This is @strocc goal #3 of season

Florida seemed to take a commanding lead of the game when they doubled their lead just over a minute into the second half.

Again it was Monteagudo, but this time the goal came off of a throw-in. Monteagudo took the throw in, and ran down the right side of the defense into the box. What seemed to be an attempted cross as she headed out of bounds ended up being lofted over Dossey, and into the far corner of the net for a beautiful goal that had Florida on top 3-1.

And then Missouri responded with a comeback of their own, scoring two goals in as many minutes.

At the 61st minute, a series of missed clearances by the Gators led to the ball falling to Tiger forward Melanie Donaldson. With the ball bouncing and her back to the goal, Donaldson spun and sent a bouncing left-footed volley far post and past Marckese. Not only did the goal cut the deficit to one, but Missouri got momentum from the goal that they played with for most of the second half.

A good build up from the Tigers resulted in Erin Webb getting the ball in a dangerous area down the left flank. She whipped in a cross to the near post that found the head of Jessica Johnson for the goal and her second of the game. Johnson had her brace, Webb had the assist, and it seemed Missouri was just as likely, if not more than, Florida to find a game-winner in regulation.

Marckese made sure it wasn’t Missouri with a game-winning goal at the end.

With less than five minutes left in the match, Marckese made one of the biggest plays of the game. The Gators conceded a penalty kick after a slide tackle in the box by defender Rachelle Smith. Donaldson stepped up to take the potential game-winner, but Marckese started going to the left before the shot was even taken. Marckese guessed correctly and sent the game into overtime.

There weren’t many clear opportunities in the two overtime periods of 10 minutes, which each team relying more on intensity and defense than an attacking moment of brilliance. After 110 minutes of tied soccer, the two teams headed to penalty kicks.

Both teams started off on fire, each hitting their first seven penalty kicks. Then the dynamic tandem of the night, Marckese and Monteagudo, saved the night for the Gators.

Marckese saved Missouri’s eighth penalty of the shootout, coming up with her second, big penalty stop of the game.

Monteagudo then stepped up with the chance of victory at her feet. She calmly went up and sent the ball to the lower left-hand corner while sending the Gators to the semi-final round.

Native New Englander. Follow me on Twitter: @jonacosta_10
@jonacosta_10
Previous Gators Preparing for a Trip to Arkansas
Next Florida Volleyball: A Night of Streaks, And A Milestone Win