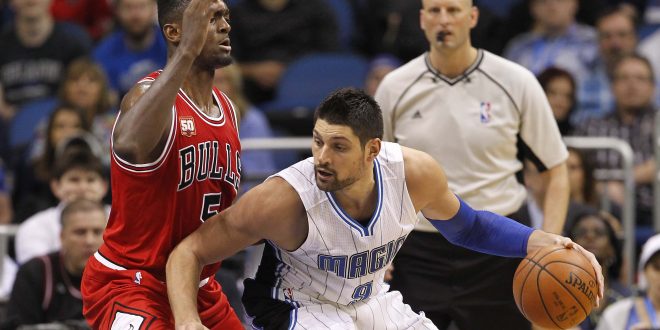 There will be magic in the Windy City tonight as the Orlando Magic travel to take on the Chicago Bulls at the United Center.

Both teams are tied and completely opposite of each other.

The Bulls started off the season 3-0 but after loosing three straight games, they’re now in a funk.

The Magic started 0-3 but with wins over Philadelphia, Sacramento, and Washington, they’re tied with the Bulls for the eighth playoff spot in the Eastern Conference.

The Magic have been averaging 95 points a night, giving up 100.3. Evan Fournier leads the team with 18.2 points per game and Nikola Vucevic leads way with 11.5 boards a contest while Elfrid Payton has been dishing out an average of 6.7 assists per game.

The Bulls have been putting up 106.5 a night, giving up 103.8. Jimmy Butler has lead the team with 21.2 points per game and Taj Gibson leads with 9.2 boards a night while Rajon Rondo passes the ball for 6.8 assists per game.

Former Miami Heat player, Dwayne Wade entered this season as a career 28.4 percent three-point shooter with a career high of 31.7 percent in 2008-2009. After going 0-for-2 in the Bulls loss against the Pacers, Wade has connected on 10-of-21, already surpassing his entire total of seven 3s from last season.

Orlando Center, Bismack Biyombo, says the Magic need to take what they’ve done during their 3-game winning streak into their game with Chicago tonight.

Although this is not the 2015-2016 Bulls, we still don’t know how good these Bulls are compared to the last. The faces might be different, but the issues are still the same.

With Dwayne Wade’s three-point shooting and Jimmy Butler’s free throw abilities, the Bulls could potentially find themselves in the win column for the first time in a week.