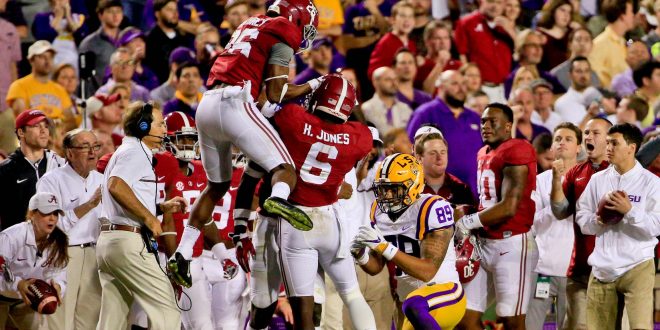 No. 1 Alabama defeats LSU 10-0 this past weekend. --Derick Hingle--USA Today

With the second College Football Playoff rankings set to be released on Tuesday, the top 5 teams in the country all took care of business last week.  Let’s take a look at the SEC’s chances and the way the College Football Final Four Playoff is taking shape.

SEC previous one-loss hopefuls No. 4 Texas A&M and No. 10 Florida had their playoff hopes crushed this weekend as A&M lost 35-27 to Mississippi State, and Florida went down 31-10 to Arkansas.  While the Gators are still the favorites to win the SEC East, the Aggies’ second SEC loss effectively gashed their playoff hopes, along with any thoughts of an SEC title game appearance. 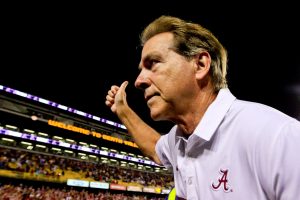 #1 Alabama (9-0) –  After shutting out LSU 10-0 this past weekend, Alabama remains unbeaten with a 9-0 record. Nick Saban and company are the clear No. 1 team in the country.

#2 Clemson (9-0) – Heisman contending QB Deshaun Watson led Clemson to a convincing 54-0 victory over Syracuse, which should keep them securely in the No. 2 ranking with a perfect 9-0 record.

#3 Michigan (9-0) – With a 59-3 win over Maryland, The Wolverines led by QB Wilton Speight are turning heads. Head coach Jim Harbaugh has taken Michigan to a 9-0 start, and they’re in position to control their own destiny.

The No. 4 and 5 rankings could go either way between these two teams, however Ohio State still plays Michigan the last game of the season. Washington will find themselves in the top 4 if they are able to take care of their remaining schedule of USC, ASU, & Wisconsin.

Lousiville (8-1) – At 8-1, Louisville and Heisman front-runner Lamar Jackson are rolling, with their only loss coming in a 42-36 thriller at Clemson which came down to the final whistle, as Jackson’s 4th down pass to James Quick came up just short of a first down at the 4 yard line, allowing Clemson to hold on.

However ultimately their strength of schedule, or lack thereof, appears to be the catalyst that will keep them on the outside looking in, unless they get some help.

Auburn (7-2) – Yes they have two losses.  However with Wisconsin and Texas A&M losing, Auburn has the best chance of any two-loss team to sneak into the Top 4.  The biggest positive for them is their remaining schedule.  Assuming they take care of business vs. Georgia and Alabama A&M the next two weeks, that would set up a massive final regular season game at No. 1 Alabama, with the winner representing the SEC West in the SEC Championship Game.

While Auburn will no doubt be a big underdog going into Alabama, if they were able to win that game, along with the SEC Championship game and get some help, the final playoff rankings could get very interesting with Auburn potentially sneaking into the Top 4.