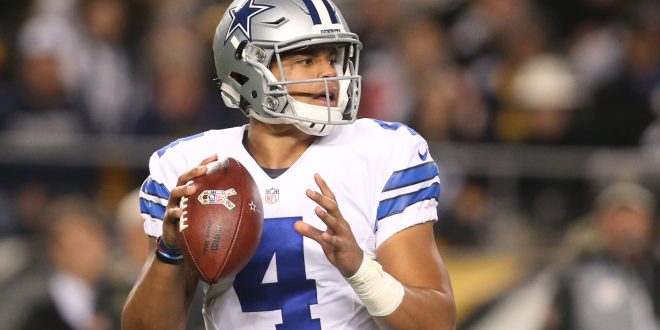 In Dak We Trust; Cowboys To Stick With Prescott As Starter

On Aug.25, just 90 seconds into the Cowboys pre-season game against the Seattle Seahawks, Dallas’ entire season changed. Starting quarterback Tony Romo took a crushing hit from linebacker Cliff Avril that forced him out of the game. At the time, the injury didn’t seem serious. But it was later revealed that Romo re-injured his back and would miss extensive time.

For Cowboy fans, it was a nightmare. The team hadn’t won a game without Romo the season before, leading to a 4-12 record; It was their worst record since the 1989 season when America’s team went 3-13.

Dak To the Rescue

But then in came Dak Prescott. The fourth-round pick from Mississippi State took the reigns as Dallas’ starting quarterback and with the help of fellow rookie Ezekiel Elliot, has helped lead the Cowboys to an NFL-best 8-1 record.

The Cowboys have been unstoppable since losing their season opener to NFC East rival New York; in fact they haven’t lost a game since, winning eight straight.

The @dallascowboys have won 8 straight games for the second time in franchise history (also did so to start 1977 season) pic.twitter.com/tfNwS9WMKZ

Not only is this winning streak historic for the Cowboys as a team, but Prescott has done something only one other rookie quarterback has done in history.

Dak Prescott has won 8 straight starts. That’s tied for 2nd-longest win streak by a rookie since the 1970 merger (via @EliasSports) pic.twitter.com/lWTDghIsgw

The key to Prescott’s success is attributed to the emergence of running back Ezekiel Elliot and possibly the most dominant O-line in recent history. But the Hail State product doesn’t commit many errors and keeps his offense on the field. In fact, Prescott has only thrown two interceptions the entire year to go along with 14 passing touchdowns and four rushing touchdowns.

With this success it was an easy decision for the Cowboys to name a healthy Romo the backup as they head into their week 11 game against the Ravens.  Why bother changing the formula for a team that is off to their best start in years? Dallas now not only has one of the hottest quarterbacks in the NFL, but now the best backup QB as well. If Prescott struggles or gets injured, Romo will step in right back in and continue the charge.

Im a senior at the University of Florida currently pursuing a degree in Telecommunications. I work for ESPN Gainesville 95.3 and anchor the Monday sports broadcast for WUFT First At Five. Im from New York and an avid sports fan of all New York teams.
Previous Expected Shake-up in College Football Playoff Poll
Next Giants Trump Bengals in Monday Night Football