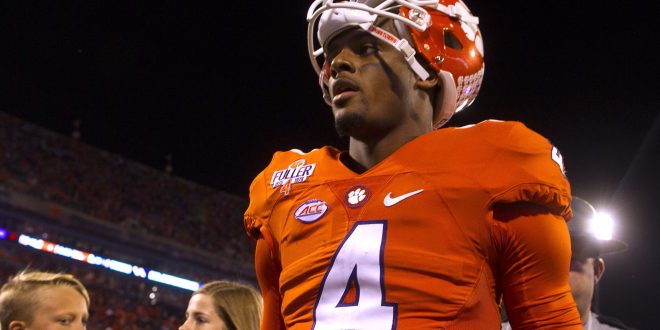 If you were a betting man and had 100 dollars on Clemson, Michigan and Washington all losing on Saturday, you’d be $47,090 richer.

Needless to say, this past weekend was one of the craziest college football has had in a long time. The chaos was so much that a top-four team that loss could stay in the top four. Even with a home loss to Pittsburgh, many expect Clemson to remain in playoff contention.

Even though they faltered, the committee should understand that they control their own destiny and would likely earn a spot in the playoff if they win out and win their conference. Louisville could potentially slide into a top four spot with Washington and Michigan going down. Big Blue is now looking at a potential play-in game with the Ohio State Buckeyes if both stay at one loss when they meet next.

As for Louisville, they can still snatch an at-large bid since it is likely they won’t even get to play for a conference championship. Many still believe they are one of the best teams in the country but have the unfortunate head to head loss with Clemson.

Amidst all the chaos this season, the only certain thing is that the Tide are rolling. Alabama has continued to look like the number one team in the nation. Head coach Nick Saban was pleased with the way his guys handled their business against Mississippi State this week. The Crimson Tide will remain at the top spot until proven guilty. As of now, they’re running away from the field after a 51-3 win. The updated rankings release tonight at 9 p.m.

Previous Florida Women’s Basketball Beats Chattanooga
Next In Dak We Trust; Cowboys To Stick With Prescott As Starter