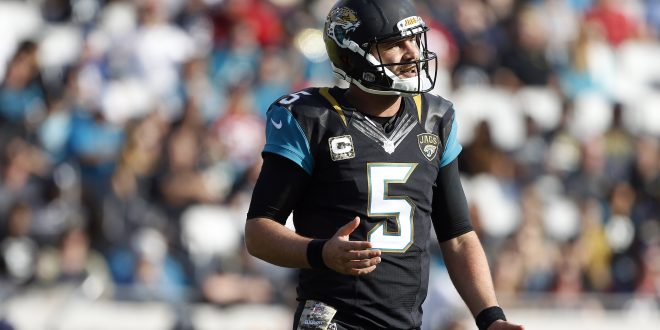 The Jacksonville Jaguars (2-7) sit in the cellar of the AFC South, a division that some thought they would potentially win this year.

The Jags started the season 0-3, then won two straight and shined a glimmer of hope into the minds of fans.  But after losing the last four, they trail only the lowly Browns and the depleted 49ers for worst record in the NFL.

The latest loss came on Sunday, 24-21 to the struggling Houston Texans, in a game where the Jaguars never led.

To epitomize a team’s season in one play is rare, but with 11:55 left in the second quarter of a 14-7 game, QB Blake Bortles threw a screen pass off his running back TJ Yeldon’s leg/shoe and it popped up in the air and fell into the arms of Texans’ Whitney Mercilus.

It was Bortles’ second turnover of the game after his fourth pass was intercepted for a touchdown on the team’s opening drive.

The most in the NFL since the start of 2014 (his rookie season). pic.twitter.com/uzQOF4ZJUp

Bortles, a UCF product, had a breakout year his second season in the league, throwing for 4,428 yards with 35 touchdowns. Interceptions have always been an issue though. He had 35 in his first two seasons.

Now some Jacksonville fans may be calling for a change at the quarterback position. Bortles has thrown completions to the defense 11 times in nine games, with only two turnover-free games.

Head coach Gus Bradley dismissed any thought of giving No.5 a break behind center, saying that they will keep going after it.

Jacksonville’s next game is at Detroit on Sunday at 1 p.m.