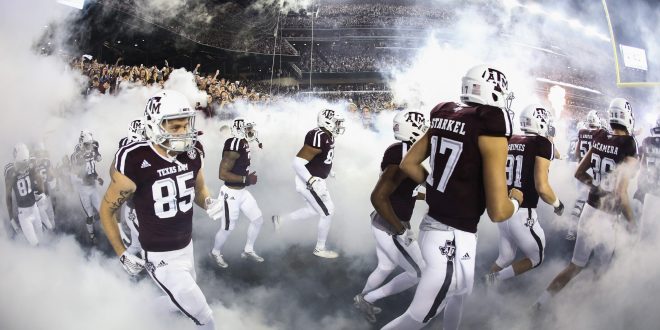 The 7-3 Texas A&M Aggies will be taking on the non-conference 5-5 Texas-San Antonio Roadrunners this Saturday to find out which Texas football team will have state bragging rights this season. The game takes place from College Station, with a noon kickoff scheduled.

The Aggies took a loss on their home field against Ole Miss last Saturday, dropping their record to 7-3. In the fourth quarter alone, Ole Miss scored 23 points on the Aggies. The Aggies rushing game was also kept to a lower-than-usual 129 yards on the ground. Quarterback Jake Hubenak filled in for  starting quarterback Trevor Knight, who had a season-ending shoulder injury the week before. Hubenak threw for a touchdown against Ole Miss and for a total of 213 yards. Texas A&M Coach Kevin Sumlin spoke about how his team is coming into this game.

Texas-San Antonio is also coming off a loss their last time out, in their case to Louisiana Tech. Texas-San Antonio does have the possibility of playing in their first bowl game in school history, which should serve as plenty of motivation. In order for the Roadrunners to be able to play in a bowl game, they need to win one of their last two games.

Key Players to Look Out For

Freshman running back Trayveon Williams has had a successful season, finding the end zone six times. Williams had 17 carries for 72 yards last week, and needs just 124 rushing yards to officially become the first true freshman in school history to rush for 1,000 yards. If wide receiver Christian Kirk gets six more receptions, he becomes the first player in school history to have 70 catches in his first two seasons.

Look out for the team’s top two wide receivers in Kerry Thomas and Josh Stewart.  Thomas has had seven touchdowns and 22 receptions for 303 yards this season, while Stewart has had four touchdowns and 29 catches for 591 yards.

Stewart had 113 yards on seven catches just last week. That performance allowed him to break the school’s record for receiving yards in a season, which was previously held by Kam Jones in 2011 with 578.