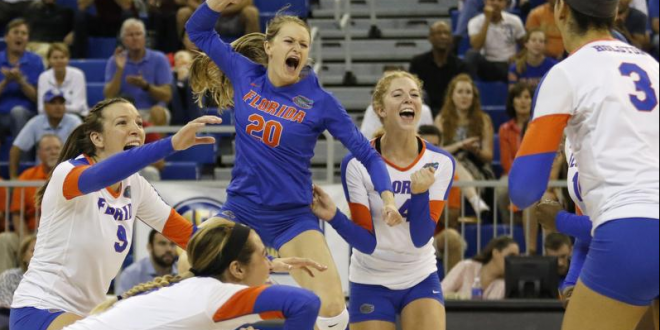 After winning 12 straight matches, the Gators are No.1 in the SEC. Florida is eyeing the finish line with only three matches left in the regular season and their next one could be the biggest yet.

Today, the Gators will take the court in Columbia against the tied at No.3 in the SEC Missouri Tigers.

The two teams met during the regular season last year twice. Florida first traveled to Missouri, where the Tigers handed them their third loss of the season, 3-2.

Missouri took the trip down to Gainesville a month later looking to sweep the Gators that season. It was Florida who left the court with the win, 3-0.

The last time the Gators beat the Tigers in Missouri was in the 2012 season, with a clean sweep from Florida.

Florida has not lost a match on the road in SEC play this season. Missouri, on the other hand, has not lost a match at home against SEC opponents. As a whole, the Gators lead the Tigers in hitting percentage, assists, kills, blocks, and digs. Missouri leads in aces with 120 to Florida’s 103.

In the SEC, Rachael Kramer (.536) and Rhamat Alhassan (.428) hold the number one and two spot, respectively, for hitting accuracy. Right below them, though, is Missouri sophomore Alyssa Munlyn (.413).

Gator head coach Mary Wise says regardless of the above stats, the Tigers are a great all-around team.

First serve is today at 4 p.m.