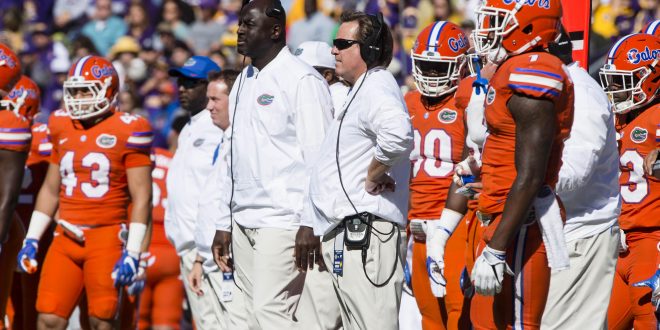 Coach McElwain Looks Ahead at FSU

It’s on to the next one for coach McElwain and the Gators.

Saturday was a huge win for the Gators in Baton Rouge. Not only did they beat LSU 16-10 to clinch the SEC East title, they also proved that October’s game was certainly not postponed out of fear. Florida earned the win with zero turnovers, three field goals, a TD by Tyrie Cleveland, and a game-ending goal line stand.

However, there’s another huge game for the Gators before they head to Atlanta that doesn’t leave much time for celebration. They need to prepare for the annual rivalry game against the Florida State Seminoles.

What makes this rivalry standout over others for the Gators, namely over matchups against Tennessee and Georgia, is the in-state factor. The Gator and Seminole players were recruited by the same guys, and they know each other. Many have been playing against each other for years.

Coach Mac has nothing but praise for the program Jimbo Fisher has built. The Seminoles lead college football in sacks this season. They have QB Deondre Francois who has thrown for 17 touchdowns in his first season at FSU. And they also have RB Dalvin Cook, who Mac describes as the best player in college football.

Moving forward, many of last week’s injuries will also apply to Saturday’s game with Anzalone, Cox, Davis, Maye and company still out. Redshirt junior safety Nick Washington will also be out after suffering an ankle injury. Chauncey Gardner and Duke Dawson will likely step up at safety in his absence.

Previous MNF Preview: Texans and Raiders Bring the NFL to Mexico
Next Florida Prepares for Hardest Test Yet against Belmont