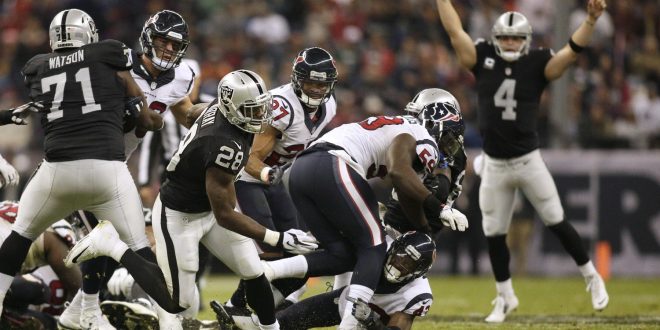 It took a fourth-quarter comeback from the Oakland Raiders to defeat the Houston Texans at Estadio Azteca Monday night.

Trailing 17-13 after three frames, QB Derek Carr led a huge fourth quarter to secure the win. In the first three quarters, they looked like the Raiders of old with only 120 combined yards of offense. But Carr put up two scores in the final 15 minutes to seal a 27 to 20 win over Houston.

It was a tough battle from both sides, but Jack Del Rio was happy to have his club come out on top for the eighth time this season.

The Raiders improve to 8-2 on the season and are back on track to make a run in the AFC. The win gives them control of the AFC west with a one-game lead over the Chiefs and Broncos. Despite a loss, there were some positives for Houston. Running back Lamar Miller ran for more than 100 yards and a score. QB Brock Osweiler threw for almost 250 but had a costly interception.

The Texans stand on top of a weak AFC South even with the loss. Knowing that coach Bill O’Brian knows its time to move on from this.