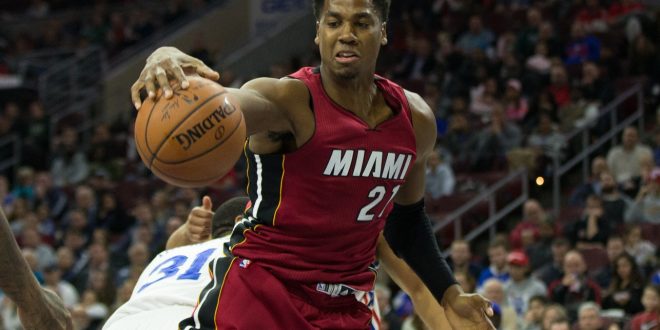 The Miami Heat and the Orlando Magic both had harsh losses last night.

The Heat fell to the team that was once last in the Eastern Conference–the 76ers–only to take their spot in the cellar. Now 12th in the conference and 4-9 on the season, the Heat is running out of time to turn things around. Although they were able to put points on the board, it wasn’t enough to stop Philadelphia. The Magic wasn’t much better, with a 93-89 loss. The close game against Milwaukee just couldn’t be turned around. Orlando is now 6-8 on the season, and 10th in the Eastern Conference.

In the city of brotherly love, the lead bounced back and fourth in the first half of this game. Miami occasionally was up by two or three points, but could never hold it.  After the second half, Philly was able to keep it until the end. The Heat shot 38.6 percent from the field. Game leaders included Hassan Whiteside who had a career-high 32 points in this game with 13 rebounds. Goran Dragic had something to add with three steals. Dragic also has 5.8 assists per game. Other than that, it seemed as though the offense has several improvements that can be made. Miami head coach Erik Spoelstra breaks it down.

The Heat will take on Detroit Pistons Wednesday night at 7:30 p.m. in Detroit.

Orlando had much higher hopes going into this game. Only losing by four, their best efforts to avoid becoming 6-8 weren’t enough. Turnovers really hurt the Magic in this game. Milwaukee came at them full force, even after a three-game losing streak. They kept Orlando in 10th place in the Eastern Conference. The Magic shot 42.1 percent and it turned the ball over 25 times. Head coach for Orlando Frank Vogel says his team usually doesn’t struggle with this. However, this game was still neck and neck until the very end. Players like Evan Fournier and Elfrid Payton put minimal points on the board. Fournier had 18 points and five rebounds and Payton had eight points, seven assists and nine rebounds.

If the Magic can improve their offense and their points per game, they have a chance be successful.

The Magic tip off against the Suns at home Wednesday night at 7 p.m. hoping to become 7-8.