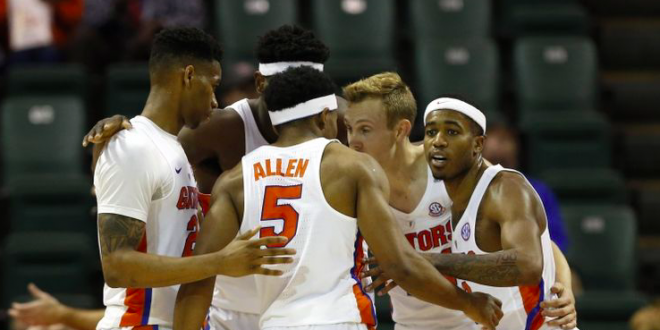 The Florida Gators lost to the No.11 Gonzaga Bulldogs 77-72 on Friday night. They now will continue in the Advocare Invitational to face the Miami Hurricanes.

The Miami Hurricanes have beaten up on the Florida Gators for the past two seasons, and the Gators men’s basketball team hopes to snap that streak when they meet up in the AdvoCare Invitational consolation bracket Sunday night.

After the Gators fell to No.11 Gonzaga Friday night they now face Miami in the consolation bracket for third place in Orlando. The Gators earned their first loss Friday night by a score of 77-72. Florida led at halftime but couldn’t keep pace with the Zags throughout the second half.

You won't want to miss this one. pic.twitter.com/rjj66i7fdB

“We’ve got to get rest we’ve got to hydrate. We have a really quick turn here and we’ve done a lot of traveling. We’ve got to recharge our batteries. Somehow after an emotional loss where our guys were really juiced up, we’ve got to prepare for Sunday against a really good acc program,” Head Florida basketball coach Mike White says.

Forward Devin Robinson scored 18 points the other night against the Zags, after fouling out in their game against Seton Hall. Robinson doesn’t want to get caught up in the loss Friday night and wants to play well facing another tough team.

Get knocked down, gotta get right back up. #OneTeam #OneGoal

“We need to work on the things we didn’t do and come out Sunday and try to get another win. I feel like it’s a good opportunity for us for us to improve on our character and compete at a level and win.” Robinson said.

The Hurricanes fell to No. 21 Iowa State earlier Friday night and received their first loss as well with a final score of 73-56. Miami’s first loss of the season to Iowa State could be blamed for the large amount of turnovers, 19 of them to be exact. They also gave up 18 points in the paint.

The Hurricanes, another team that was in the 2016 NCAA tournament, will still be a tough challenge for the Gators. Miami is still rebuilding as they lost three starters that helped the team in the 2016 tourney before falling in the Sweet 16 to National Champion Villanova.

Canes Point guard Ja’Quan Newton averages the most points for the Hurricanes. He isn’t afraid to take those shots and averages 17.6 points per game.  He’s 31-for-57 on two-point shots and is a good free throw shooter at 72 percent at the line. However he isn’t really an assist guy with only 17 over the last five games. Guard Anthony Lawerence Jr. is a scorer the Gators will need to watch for while shooting 45 percent from the floor and 38.5 percent from the arc. He averages 8.4 points per game. Guard Davon Reed is another one who will shoot the three, but only shoots at 30 percent clip.

The Florida Gators will face in-state foe Miami at 4:30  p.m. in Orlando at Disney’s Wide World of Sports. Radio coverage will be on ESPN Gainesville 95.3 FM and the game will be televised on ESPN 2.